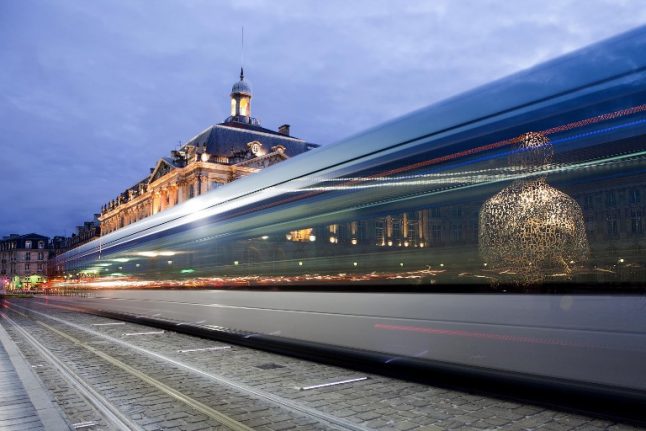 The price of transport in Bordeaux is just one of the things that will change in August. Photo: AFP
Water restrictions
Certain departments in France have taken measures to limit the use of water in their area due to the risk of drought as the mercury continues to rise across the country.
There are four levels of drought ranging from vigilance, when people may be incentivised to save water, to crisis level, when people are only allowed to use water for high priority reasons such as for agricultural purposes, drinking water and health related reasons.
The departments currently on the highest alert (crisis level) are Eure-et-Loir, Loiret, Loire-Atlantique, Vendée, Deux-Sèvres, Indre, Lot and Tarn-et-Garonne.
The restrictions are likely to remain in place throughout August.
To get the latest information on which departments are on alert, you can check the government website Propluvia.
Bordeaux, Lille transport price hikes
From August 1st the price of using a bus or the tram in Bordeaux will be slightly higher – 3 percent higher in fact.
A single ticket will cost €1.70 while a card for 10 journeys will cost €13.20 and a monthly pass will set passengers back €33.10.
And in Lille the price of using public transport also rises in August, with a single ticket going up from €1.60 to €1.65. (Bordeaux)
Alzheimer's medicine
From August, four drugs used on sufferers of Alzhemer's disease will no longer be reimbursed by France's national healthcare insurance system, the “Assurance Maladie”.
The drugs concerned are Aricept, Ebixa, Exelon, Reminyl as well as their generics (copies of the brand name drugs).
Previously, these drugs were reimbursed by up to 15 percent, the cost of which was estimated at €90 million in 2015.
However France's Haute Autorité de Santé (High Authority for Health) has reassessed the actual benefit these drugs have and has concluded that they aren't very effective and have significant digestive and cardiovascular side effects and can also affect the a person's mental health.
Gas prices
Gas prices are set to go up from August 1st… but only slightly.
The average increase will be 0.2 percent, with those using gas for cooking and people using it to cook and hot water set to pay around 0.1 percent more.
Those who use gas for cooking, hot water and heating will fork out 0.2 percent more. Photo: AFP
Electricity prices
Meanwhile electricity prices for households are set to fall by 0.5 percent in line in line with a recommendation made by France's energy regulator (CRE).
However they are set to increase by 1.1 percent for small businesses.
Childcare
The minimum wage for nannies is set to go up from €9.98 per hour to €10.21.
In-home nurses
Domiciliary nurses will receive €8.50 per hour instead of €8 for the care they provide on Sundays and public holidays.
According to France's public health authority, this is “to better value the continued care they have to provide”.
End of the summer sales
Don't forget that you don't have long left to take advantage of the summer sales in France. They end on August 7th everywhere except in the Pyrénées-Orientales and Alpes-Maritimes where the sales period lasts until August 14th, and in Corsica where they last until August 21st.