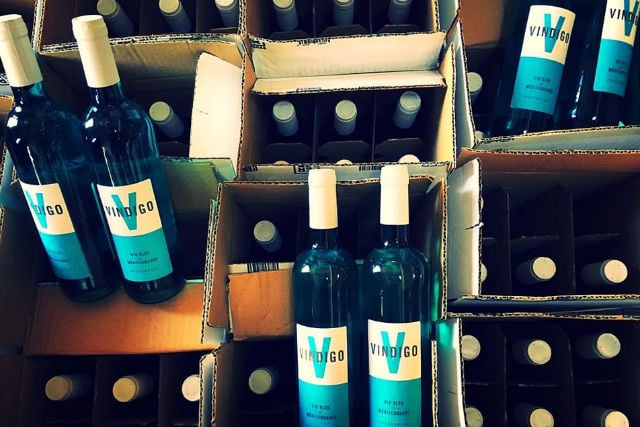 Photo: Vindigo Facebook page
It might seem unlikely that the French, often considered traditionalists when it comes to all things food-related, would welcome blue wine into their lives and onto their tables.
But Vindigo, a blue wine company based in the south east city Sète, is confident that they will.
Vindigo is a Chardonnay wine, made in the south of Spain but only sold in France, gets its blue colour as a result of being filtered through red grape skins which contain anthocyanins.
These pigments are also found in blueberries and raspberries.
So it may come as a surprise (and relief) that the dazzling turquoise blue colour of the wine is entirely natural.
René Le Bail, the French businessman responsible for marketing Vindigo, described the drink as an ideal “summer aperitif”.
“It is 11 percent so it's not a very strong wine. It tastes of fruit. There is cherry, passion fruit, blackberry. It's a festive wine,” said Le Bail.
And if you want to get your hands on one, it will only set you back €12.
But Vindigo isn't the first blue wine to hit French shelves. In fact in 2016 a Spanish start-up called Gik set about marketing what it claimed was the world's first blue wine.
However the wine was only available in French supermarkets for three days.
“Gik was removed from the shelves because it was labelled 'blue wine',” Gik creator Aritz López told The Local. “The EU regulations do not include blue wine among its 17 categories of wine, so no one can label it that way.
“For European countries, we had to change the formula and make it 99 percent wine and 1 percent grape juice, as well as label it as 'other alcoholic beverages'.
“It didn't change its flavor or color and it totally maintained its quality, but we had to make this little change on the label and we happily kept on selling our creation.”
Gik wine is still available online.