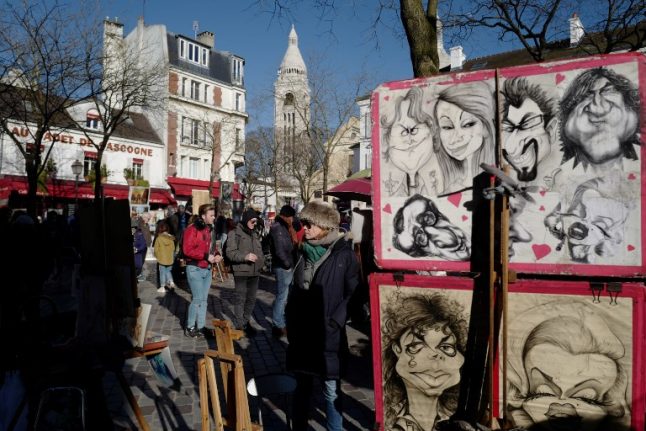 Place du Tertre in Montmartre where painters are battling bistros for space.

The painters of Place du Tertre have long been a centrepiece of the Montmartre district of Paris, which is ever popular with tourists and locals alike.

But the artists, known for painting portraits or caricatures of visitors as well as scenes of Paris, are threatening to up sticks and move elsewhere.

They have grown increasingly angry at the lack of space they have to work in due to the ever expanding terraces of the square's cafes and bistros.

“We are working in the gutters, one painter named Midani who has worked in Montmartre for 50 years told BFM TV.

“We are all over the place and have just a tiny metre of space. Our easles are in the gutters,” he said.

Officially the artists only have space for eight plots of around one square metre each. But the artists want more space in the square and believe it should be divided equally between them and the businesses.

And they also complain about the high price of renting a plot. The artists pay €620 per square metre compared to the cafés which are charged €585 for the same area. If nothing changes they are threatening to leave.

“This happened a few years ago when artists left Place des Abbesses and restaurant owners came to beg them to come back,” said painter Jerôme Feugeur.

“We are part of the decoration. People come to see the artists painting not necessarily to buy their art works.

And tourists tend to agree.

“I think the artists deserve more space,” said one American visitor. “They cannot be creative in a cramped space. I come to this square to see them not to go a café terrace.” Paris City Hall's Afa Gabelot summed up the problem authorities face when it comes to preserving the delicate balance.

“The terraces are also part of the Paris identity,” she told BFM TV. “It's very important that these two co-exist.

“We try to make sure that Place du Tertre keeps its quality and that the artists have their place but we also know that there is a balance to keep because people also come to have lunch and sit down and admire the painters from the terraces.