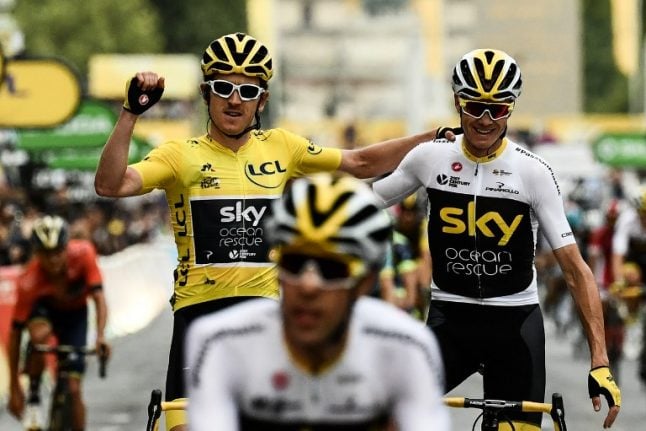 Sky's implacable and monotonous domination, briefly interrupted by Vincenzo Nibali and Astana in 2014, has allowed the British team to propel three different riders to the top step of the final podium on the Champs-Elysees — Bradley Wiggins, Chris Froome and now Geraint Thomas.

They have “the best in each position”, said Romain Bardet of AG2R, who was the best French finisher in sixth place after being overpowered by the British
outfit in the mountains.

“We have a team, a machine that has won with three different leaders,” Prudhomme said.

The youngest rider in the race was Sky's Egan Bernal, who followed victory in last year's Tour de l'Avenir, a race for riders aged 23 or younger, with
second place in this year's Tour de France young-rider category.

“They are preparing the succession,” Prudhomme said.

But if the same team keeps winning, cycling risks boring its public, even though viewing figures remained strong in France — once the country had won
the World Cup.

“Today everything is measured to the millimetre,” said Union Cycliste Internationale (UCI) president David Lappartient. “How many people are really
captivated?”

“In football, there are extraordinary, improbable reversals,” Lappartient added. “We do not have that much on the Tour de France, while we have it on the Tour of Flanders and in Paris-Roubaix (one-day classics). We want to dream of the new. We must not rule out anything.” This year the Tour experimented with an unusually short mountain stage (65 kilometres), the 17th to Saint-Lary-Soulan, to limit the role of teams. It may do so again.

But Prudhomme still preferred the 200-kilometre marathon two days later saying “it was the classic Pyrenees stage that was the most beautiful”.

The course director, Thierry Gouvenou, is looking for steep climbs to favour the climbers and solo attackers and has been doing so since 2012, said Prudhomme.

A ban on radio ear-pieces has been a subject of debate between the Tour and the teams for several years but the technology has moved on and now the
argument also includes power metres. Body and bike sensors supply instant data on each rider's performance, allowing them to fine-tune their efforts, enabling managers in team cars to plan defensive tactics.

“You have to remove the earpieces. The sensors have their uses in training but if they were banned during the race, we would be fine… There are things to be done in cycling, but we have to be quick.” Money is the biggest issue, many of those involved told AFP.

“Sky has a budget that is much higher than the second biggest on the World Tour,” said Philippe Mauduit, who heads the Emirates team

“The peloton is enormously professionalised, the gaps have become very small. The difference is in the payroll.

“We will have to do something if we want to preserve the appeal of top-level cycling. The media gags and, when they are no longer happy with what
they see, they transmit that to the public.”

He suggests a salary cap: “It works in the NBA.” Proudhomme agrees that “it might make sense” but insists it is the responsibility of the UCI.

UCI president Lappartient told AFP: “There have always been teams with superior means, but I announced a working group on the attractiveness of races during my election campaign. This will be running before the end of the year, with riders, organisers, TV, journalists, there will be ideas, nothing is ruled out.”