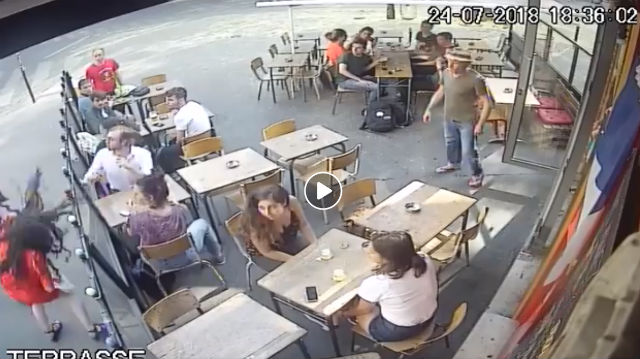 Photo: Screenshot
The story of what happened to 22-year-old student Marie Laguerre on her way home one night earlier this month has caused shock and anger in France, where the problem of sexual harassment regularly makes headlines.
Laguerre first shared her story in a Facebook post that included a video of the the incident which took place outside a cafe on Rue Burnouf, near Parc des Buttes Chaumont in the north  east of the city.
The video (see below), which has since gone viral, shows the young woman being hit in the face by her aggressor as she walked past a cafe terrace.
READ ALSO:
The incident took place at around 6.45 pm when the woman was on her way home,
Laguerre said the man “made dirty noises, comments and whistled” in her direction as he walked past.
But instead of keeping her head down and trying to move past him as quickly as possible — as many people in the same situation might — she responded to him, saying “Ta gueule!” (or “Shut up” in English).
“I didn't even think he had heard me,” she told Le Parisien.
Both continued on their way but then the man stopped and grabbed an ashtray from a cafe table and threw it at Laguerre.

In response, Laguerre insults him and he approaches her again.
“I felt hatred, I refused to be demeaned, it was humiliating,” she said. “I refused to look down, I looked him right in the eyes, I was not going to apologise.”
Then he hits her with a blow so violent that she loses her footing and bashes her head against the barrier of the cafe terrace.
The attack has left her with a swollen brow cheek bones.
“I was in pain, but it happened in a few seconds so I did not realize it right away.”
READ ALSO: Photo: Jean Francois Gornet/Flickr
The video of the attack, which was given to her by the manager of the cafe, shows the astonished looks of the customers sitting on the terrace.
Some of the customers get up to confront the man who is already walking away, with a man brandishing a chair in his direction.
In response to the video, some commenters have criticised the response of the onlookers at the cafe but Laguerre added a line to her post in their defense.
“To all those who say that the witnesses did not react well enough: everything happened very quickly and they did not have time to understand the situation. The attacker was dangerous. After the attack, I came back and the witnesses were very supportive, please don't lynch them.”
Since the attack, which took place last Tuesday, Laguerre has suffered from headaches and neck pain and has said that she is no longer comfortable in her own neighbourhood of La Villette.
“I feel my adrenaline and stress levels rise when I'm in the street,” she said.
“The problem is the systematic insecurity that women suffer as a result of men,” she added. “Some men think that the street belongs to them and that we have no business being there.”
The Paris public prosecutor has opened up an inquiry into “violence” and “sexual harassment” but so far her attacker has not been tracked down.
At the end of her Facebook post she wrote: “This is not the only incident. Harassment is everyday. To those men who think anything goes in the street, who allow themselves to humiliate us and who can not stand being offended, it is unacceptable. It is time for this kind of behavior to STOP. #AllWomenTogether.”
In France, the incident is seen by many as just one example of what many women face on a daily basis and some media outlets have chosen to stress this in their headlines.
For example, Le Parisien (see below) gave the story the headline: “Street harassment: A video that will open your eyes”. Photo: Screenshot/Le Parisien
Government response
French Equalities Minister Marlene Schiappa who has piloted legislation that aims to put a stop to street harassment has come out in support of the young student.
The minister told the French press that while she was “outraged” by the incident, she was “unfortunately” not surprised. Photo: jovannig/Depositphotos
“The political response must be strong and it is, because, for the first time in France, we will fine those responsible for street harassment,” she said.
In the bill set to be adopted at the end of the week, “annoying, following, threatening a woman … is forbidden”, she said, adding that offenders would likely start receiving fines in the autumn.
The law, which will see stiff fines imposed for sexual harassment on the street as well as on public transport, including making sexist comments, was voted through in May by France's National Assembly.
Although some have expressed doubt that it will change much about everyday life in France where street harassment is a big issue.
According to a study conducted in 2016, one in two women in France said they will choose trousers over a skirt to avoid becoming the victim of sexual harassment on public transport.
And a 2015 survey of women commuters around Paris revealed that 100 percent of respondents said they had been a victim of sexual harassment.