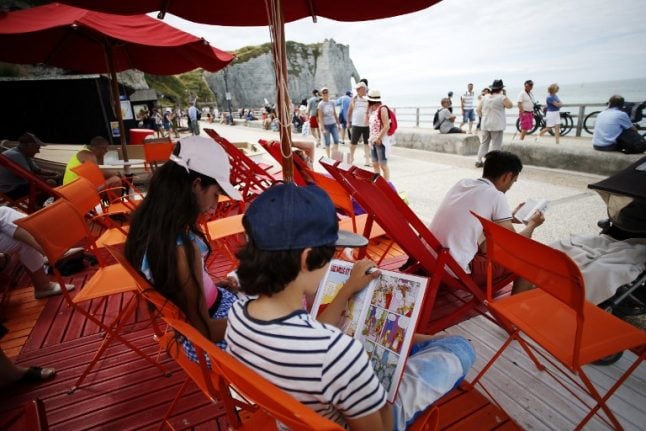 People read books outside a library, open during the summer, in Etretat, northwestern France. Photo: AFP
Lulled by the gentle cries of seagulls in the distance, flocks of readers have been heading to the book-filled beach huts that authorities have opened along the coast of Normandy in northern France and elsewhere.
“It's a perfect break for reading and relaxing between two dips in the sea,” said 52-year-old hairdresser Isabelle from her deckchair at the library in Etretat, a Normandy resort famed for its dramatic white cliffs.
“Since I'm not going away on holiday, this is my treat every afternoon,” she said, before diving back into a detective novel.
Etretat is one of 12 local resorts where authorities have set up library beach-huts this summer. Open from July 7 until August 26, each of the wooden huts has been filled with 1,000 books.
Normandy launched its “Read At The Beach” scheme in 2005 with three huts and by last year was welcoming more than 38,000 bookworms along this stretch of the coast.
READ ALSO: The idea has since taken off elsewhere in France, with the Herault region in the south attracting 21,000 readers to its own beach huts last year.
Similar schemes have also been launched in other countries including Australia, Bulgaria, Israel and Spain.
Poetry and gentleman-thieves
In Normandy, anyone is welcome to dip into a book, with no registration needed — but readers must stay in the deckchairs provided, rather than taking them down to the sea to get sand between the pages.
This year 400 chairs are up for grabs around the region at the beach huts, which are open every day between 2 pm and 7 pm, with some books in English, German and Italian provided for foreign readers.
On a recent sunny afternoon in Etretat, a dozen readers — aged between nine months and 70 — come to transport themselves to other worlds from the hut, overlooking the sea. Photo: AFP
“We need more of this kind of place,” said Romain Mace, an engineer on vacation from the city of Rouen, enjoying a volume of poetry as his baby slept beside him — a rare pleasure for sleep-deprived young parents.
Since the books cannot be taken off-site, the hut's two librarians will happily put aside a novel you've started so that you can pick up the story where you left off the next day.
Corinne Ait Amar, 47, had returned to delve back into the thrilling exploits of gentleman-thief Arsene Lupin while her daughter was engrossed in a Japanese manga comic.
“It's perfect,” said the nurse, on vacation with her family from the eastern city of St Etienne.
“My daughter and I have been saying to ourselves that we might meet up with the rest of the family a little later than planned…”