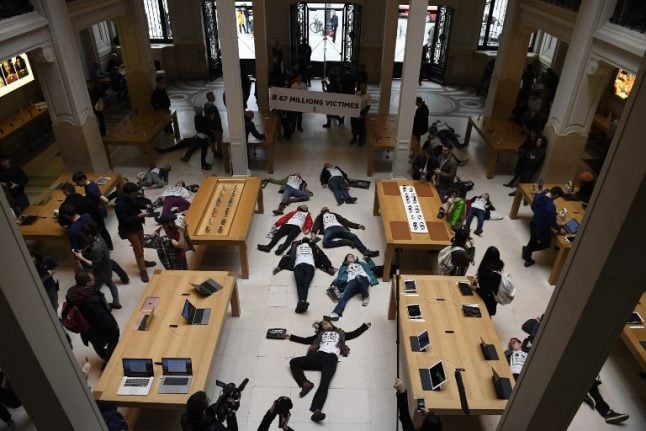 Workers in France may be left feeling a bit blue after reading about this tax-related study. Photos: AFP

For the third year in a row, France is ‘première’ on the EU leaderboard when it comes to taxes paid by its workforce.

And it seems l’Héxagone is pulling away from other countries at the top of the EU taxes table, Austria (2nd) and Belgium (3rd).

This is according to a study by pro-free-market think tank Institut Economique Molinari, which for the ninth year running is looking at the actual tax and social burden faced by the average employee in the European Union.

Tax and social Freedom Day in France came on Friday July 27, two days earlier than in 2016.

In other words, French workers have to work up until that calendar date in order to start making money they can keep. Everything they have earned up until July 27th goes to the taxman.

Other EU workers have long been free of the tax burden. The Irish celebrated their freedom on April 26th, British workers breathed a sigh of relief on May 8th and German workers said “prost!” (cheers) on July 10th.

The average date for all EU countries was June 12th.

This two-day reduction on last year's “freedom date” reflects the drop in France’s tax and social burden, from 57.41 percent to 56.73 percent, due to the implementation of a portion of the reductions promised during the presidential campaign.

But by comparison the gap is widening with other tax-heavy nations.

Austria’s tax and social Freedom Day lands on July 18 and for Belgium, the former number one in 2015, it arrives on July 17. Molinari’s ranking has the distinct feature of showing the pressure actually endured by average employees for the current year, using a solid methodology applied uniformly throughout the EU and providing a good grasp of the true impact of taxes and charges and of the shifts that are occurring.

Before having €100 in actual purchasing power, the average employee in France has to first face €131 in charges and taxes.

French workers are actually seeing a growth in their purchasing power for the first time in nine years, but charges and taxes aren’t declining as fast as elsewhere in the EU, the study found.

Since Emmanuel Macron became President of France, the reform of levies on wages has begun to take effect, enabling the average employee to recover €244 of purchasing power in 2018.

This is however only half the amount promised during Macron’s presidential campaign.

Next year, France’s decline in social charges will lead to further improvement for the average employee, with a saving of about €400 in the course of 2019.

Not that this will be enough to alter France’s ranking.

Only the conversion of the CICE tax credit into a lasting decline in employer charges in 2019 will be sufficient to reduce the gap built up over the years with France’s European counterparts.

In theory, the average French employee is among the best paid in the Union, an average salary of €56,815 placing it sixth.

But workers are so heavily taxed (56.73% in charges and tax on the full salary) that there remains only €24,582 in actual purchasing power, 11th in the EU.

For example, French employees are better paid than their Swedish or Danish counterparts, and yet they have 21 percent less purchasing power than the Swedes and 33 percent less than the Danes.