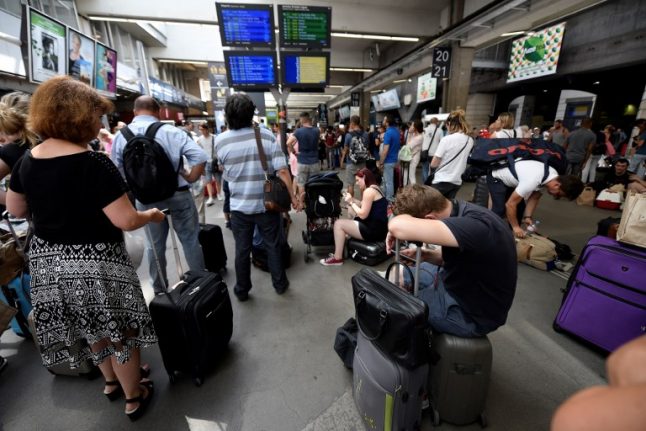 People wait at the Montparnasse railway station in Paris after several trains have been delayed following a fire. Photo: AFP
Photos and videos posted on Twitter showed a massive plume of smoke rising into the skies from an electrical centre run by the national transport network in Versailles, southwest of the city.
The blaze shut down traffic just before noon at Montparnasse, the main station connecting Paris to west and southwest France, with rail operator SNCF warning of heavy disruption for the rest of the day.

“Those who can delay their journeys need to delay them,” Alain Krakovitch, a senior official at rail operator SNCF, told reporters at Montparnasse.
The station in southern Paris, which in the midst of a heatwave is sweltering in temperatures of 35 degree Celsius (95 Fahrenheit), was crowded with stranded passengers staring up at the departure boards.
“It's infuriating, it's not clear at all what's happening,” said Eva Basin, a 42-year-old Parisian who was supposed to be heading off on vacation to Brittany.
“They've advised me to delay my ticket, but I only have a week of holidays,” she said. “All the trains for tomorrow are full. I'm going to try to take a bus.”
Some trains were back up and running by Friday afternoon, albeit with a three-hour delay, while others were re-routed.

SNCF official Patrick Jeantet said the electrical centre hit by the fire was a crucial site which controls Montparnasse's safety installations.
Authorities were seeking to reroute some TGV trains to another main station, Austerlitz, he added.
SNCF said TGV trains to and from the south-west including Bordeaux are being rerouted to Austerlitz. A shuttle bus is being laid on to take passengers to from Montparnasse to Austerlitz station.
TGV trains from the west of France including Brittany and Pays de la Loire are still heading to Gare Montparnasse. While TGV services to Tours and Poitiers are being cancelled.
This information could change so the wisest thing is to check the SNCF website before you head to the station.
The shutdown came just as the French capital empties out for August, when many Parisians traditionally head to the beach or countryside for much of the month.
Montparnasse station was the scene of similar transport chaos almost exactly a year ago, when a giant signalling failure caused three days of heavy
disruption.
Travellers crossing between France and Britain were also suffering disruption Friday, as the heatwave prompted delays in the Channel Tunnel.