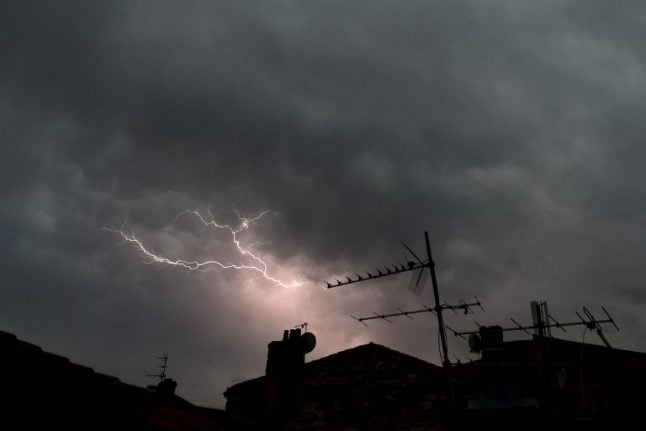 Illustration photo: AFP
It was difficult to get a proper night's sleep for most people in France on Thursday night.
After a sizzling day, temperatures didn't drop significantly once the sun had gone down, with the mercury in Paris at 24.6C even at 5 am.
According to weather experts the last time it was this hot in the French capital was 1976.
Meanwhile, those in other cities in France weren't getting much rest either, with temperatures in the northern city of Lille at 21.7C, Lyon at 22.1C and Reims in the Grand Est and Dijon in Burgundy at 19.6C overnight. Photo: AFP
And the mercury is set to stay high on Friday, with storms expected to hit certain parts of the north of the country as a result of the heatwave.
In total, 25 departments are on orange alert — the second highest warning — for heatwaves and/or storms by France's national weather agency Meteo France.
READ ALSO: Map: Meteo France
Those on heatwave alert are Aisne, Ardèche, Côte-d'Or, Drôme, Marne, le Rhône, la Saône-et-Loire.
Those on heatwave and storm alert are Paris and the area immediately outside the city known as the “Petite Couronne”, Yvelines, Essonne and Val-d'Oise, Pas-de-Calais, Somme and Nord.
While those on alert for storms are Seine-Maritime, Eure, Oise, Cher, Eure-et-Loir, Loir-et-Cher and Loiret.
People in these areas are advised to remain vigilant due to the risk of dangerous weather. Photo: AFP
Temperatures are expected to reach a roasting 36C in the French capital and a possible whopping 39C in the Burgundy capital, Auxerre.

In the rest of the country, Rennes will see temperatures of 23C, Nantes will see the mercury rise to 25C, Toulouse is set to reach 32C and forecasters predict it will reach 35C in Strasbourg.
READ ALSO: