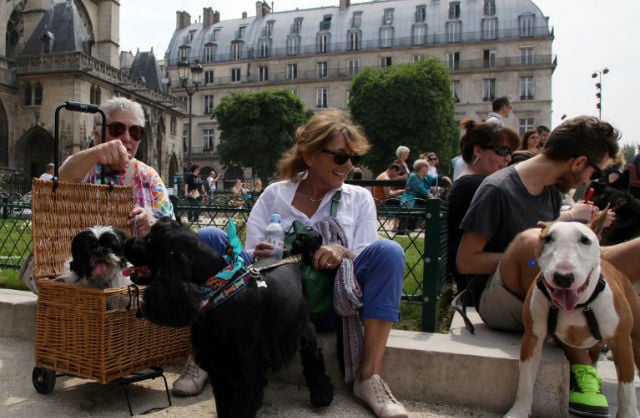 Photo: AFP
Being able to have a chat with your neighbours and people you regularly see in your local area is something that can quickly make you feel like you're becoming a local.
This is especially true if you're settling in in a new country and hoping that one day you'll feel like you truly belong. And managing to have a little chat with people that you might never know on a first name basis is an essential part of that.
But this can be difficult when you take into account language difficulties and the fact that making friends or even acquaintances can be a slow (although ultimately rewarding) process in France.
After living in my apartment for a year, I assumed I'd got as far I could expect to with my neighbours, who were perfectly polite but offered little in the way of idle chit chat… this may have something to do with my overzealous smiles in a misread attempt to lure them into telling me an anecdote or tidbit about their day.

But then some friends asked me to look after their tiny chihuahua, Coco for a week. Coco in Montmartre. Photo: The Local

Now, I know most chihuahuas are tiny but it's something still worth mentioning about this little dog who I've heard is considered miniscule even among her peers.
The experience of looking after her was like being given the key to the executive bathroom, suddenly I was a neighbourhood VIP.
And while perhaps it shouldn't have come as such a surprise — after all, it's been said before that no other city seems to treat dogs as well as the French capital, the extent to which that was true still came as a surprise.
This was a world that had seemed totally separate from my own petless one… until Coco came to stay.
On the very first morning I took her for a walk, the love-in began almost immediately when I bumped into my gardienne in the lobby.
“Or lo lorr! What a beautiful baby!!” she said, making gushing noises and blowing raspberries all over Coco's face. Photo: Turning Parisian blog
She then rushed into her office leaving me stunned in her wake because, while she has always been one of your friendly gardiennes until that point I'd never seen her so enthusiastic. And that includes at New Year when the everyone in the building was handing her envelopes stuffed with cash as part of the January tipping custom in France.
When she returned she gave Coco a treat and more fuss and then a regretful wave as I attempted to manoeuvre the chihuahua away from the cloud of adoration engulfing her.
Little did I know that that was only the beginning, once in the street people I'd previously walked past and attempted some interaction with, including waiters from nearby cafes, restaurant owners and people living in neighbouring apartments, to no avail, were rushing over to shower her with yet more affection and declare their love.
I should add at this point that Coco is undoubtedly a cute dog — I've seen even those with the most ardent hatred for small dogs seduced by her charms.
Nevertheless I'm sure even her owners wouldn't object to me saying that she is no longer a young dog and as proof of this she has a little fang (one of two which remain) poking out of her mouth which gives her a sort of pirate look. So I can only imagine what walking her would have been like in her prime.
Over the week that followed we were held up several times a day when I took her out for her constitutionals, with some people actually gasping at the site of her.
One French mother whose little boy wanted to pet her told me that this was the first time he'd been brave enough to go near a dog, even a little one, and at one point I feared that I might have to buckle to the sentimentality of the moment and just hand her over. Another pampered Parisian pooch. Photo: Turning Parisian blog
On another occasion an elderly woman asked me how old my 'baby' was and asked if she could hold her. Then she proceeded to tell me all about her own dog who had recently died but who she had treated like a child, feeding it the same meals she ate and even letting her sleep in her own bed.
The way people sought me out to tell me their personal stories and lavish praise and affection was a revelation. It might have been Coco who was the target of their affection but like a celebrity hanger-on I enjoyed bathing in the glow of her fame.
French people looked at me differently, were nicer to me and I couldn't get enough of it.
I'm sure some of you will be thinking, so what? Dogs are loved everywhere. But in Paris it's another level. I've owned dogs in the UK and sure, you might get some attention from time to time but in the French capital, where canines are welcome in restaurants, shops and carted around in handbags, people wear their hearts on their sleeves when it comes to pooches.
After a week, the time came to hand Coco back and as well as missing having her around the apartment, I would also feel the sharp disappointment of people in the area that had enjoyed giving her a treat on our walks when I told them that she'd gone back to her old life in the Marais.
And all of a sudden my 15 minutes of local fame was over.