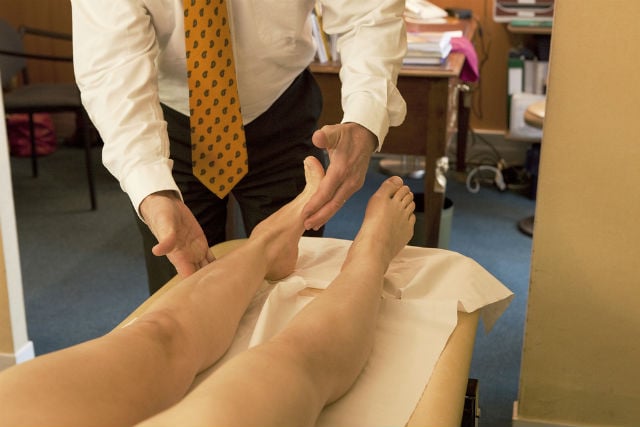 The fromagerie (cheese shop) is one place.

The tax office another. And definitely the bank. But in each of these settings I have never ended up without any clothes due to a poor understanding of French.

No place in France do you need your French lingo more than the doctor's surgery. Not only do you need to tell the doctor exactly what's wrong with you – you can't get away with pointing to parts of your body and saying the word “mal”, but you also need to understand what they're asking you.

I realised that after a couple of weeks of being in France, when at the time my French was limited to phrases I could read on a restaurant menu, Paris street names and “J'ai mal à la gorge”.

Funnily enough I had a painful sore throat that wouldn't go away and was encouraged by my French in-laws to visit their family doctor, an elderly man who had been in the profession all his life and was now not far off retirement.

I walked in to his little surgery in the 14th arrondissement in Paris and sat down. I didn't wait for him to speak and just said the words “mal à la gorge” that I had remembered from the health chapter of the Tricolore school textbooks.

READ ALSO: Just how healthy is the French health system? He asked me a question to which I just replied “mal a la gorge”.

The doctor remained fairly expressionless and then gestured for me to take off my clothes.

But he gestured again that I should remove my clothing and pointed towards the doctor's bed.

I said the word “toute?” which I meant as “everything?” and he nodded his head and then sat there waiting for me to get on with it.

What the heck is going on here. Am I being stitched up?

“Mal à la bloody gorge”. I was totally confused why a problem with my throat meant I had to get naked. But I was too shy and lacked the language to properly question the doctor.

So I got undressed down to my birthday suit or “à poil” as they say in French.

Now standing naked in front of a doctor is no big deal even if it was for a sore bloody throat. He must have seen it all over the years.

But the problem then was I placed my trousers on the back of the chair and as I did, the €23 of small coins I had in my pocket that were to pay for the consultation fell out on to the floor and rolled into every corner of his surgery and under the desk where he was sitting.

READ ALSO: Is living in France really better for your health? “Ah merde, pardon,” I said, but the doc remained expressionless. He said nothing and just slightly adjusted his glasses.

Rather than leave the coins there until after the examination, I thought it would be best to pick up my pieces of copper from his floor so walked around the room naked, bending over and getting on all fours under his desk to pick up all the money.

I was now no longer suffering from a sore throat but had developed angina and severe respiratory problems and could have done with lying down and being properly examined.

The doctor remained where he was, silent until the coins were back in my pocket.

I went over and laid down on the bed.

The doctor came over, put his fingers on my neck and under my chin and said, “Oui, mal à la gorge” and then told me to get dressed again*. “Tu te fous de ma guele,” I wish I could have said.

In my head I am cursing my in-laws.

How have they not noticed their doctor was a pervert all these years? Surely there must be other patients he has taken advantage of in a similar way, encouraging them to place their trousers on the chair so all their coins fall out under his desk?

I didn't care if he was close to retirement, this deviant 'moctor' needed outing.

It was, I now know, all my fault. And the poor doctor probably went home to his wife cursing this perverted English patient who took all his clothes off for a sore throat and threw his money around the surgery naked.

I think he retired shortly after our one and only appointment.

What I hadn't realised is that in France it's quite common for the doctor to take the time to give you a basic examination.

So even if you go in with a sore toe, finger or throat they will normally give you a once over and check your blood pressure and chest and perhaps poke around your stomach.

With the great benefit of hindsight and after numerous discussions with locals what I should have done at this point was leave my pants on, even trousers too, but the doctor had nodded when I asked “everything” so everything came off. And he could have spared my blushes and flushes by gesturing to stop once the T-shirt was off, couldn't he?

The incident was a painful lesson about the problems that can arise in France if you don't have the right language.

There are things I should have done differently.

I should have just bought some Doliprane (paracetamol) from the pharmacy and stayed home.

But one tip an English friend gave me that sounds wise is to make a list of relevant French vocabulary you need before you have your doctor's appointment so you can at least list your symptoms.

It's also worth learning as much vocabulary about health in general so you know the process.

If you are really struggling I also wouldn't be afraid to try saying the word in English. Often French doctors will know more English than they let on.

And don't be afraid to ask them to repeat what they are telling you if you don't understand. Ask them to write down key words and get them typed into Google translate.

But most importantly, don't take your underwear off unless absolutely necessary and pay by cheque rather than coins.

*He did to be fair to him take my sky high blood pressure as well and I think he listened to my heavy breathing but the examination was brief to say the least…probably to spare all parties any further torture.

If you have a story about life in France you want to tell to our readers, please email [email protected]