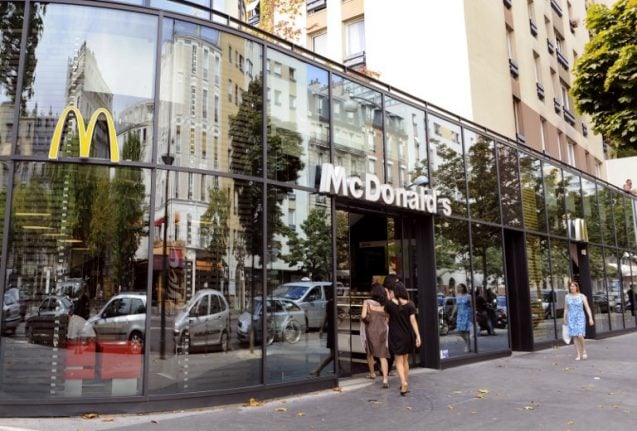 AFP
France is known for producing a vast array of delicious ingredients which go into creating world-class dishes.
But the French love of junk food is also well documented — from France's love affair with McDonald's (or 'le McDo') to the astonishing amount of pizza they scoff down, to the so-called 'Nutella riots' this year which left some French people fighting tooth and nail to get their hands on discounted pots of their favourite chocolate spread.
But their love of unhealthy food doesn't stop there.
Thanks to a new survey carried out by pollsters Ifop on behalf of health food site Natura Sante, we can see exactly which junk foods the French love eating… and which leave them feeling the most guilty and ashamed.
And it seems like the French have quite a sweet tooth, with chocolate and ice cream claiming the top two spots, with 99 percent and 98 percent of those surveyed saying they indulge “often or “from time to time” in these sweet treats (see red column below).
But it's not all about the desserts for the French… after all they're known for liking their fair share of salty foods.
READ ALSO: Graph: Ifop study for Natura Santé
Hot on the heels of chocolate and ice cream are chips, pizza and salty snacks including crisps, pretzels and nachos, with 97, 96 and 94 percent of people surveyed saying that they “often” or “from time to time” indulge in these foods.
Following those were sweets (89), the ever-popular burger (85) and ready meals (83).
In ninth and tenth position were spreads like Nutella (78) and kebabs (72), with Natura Sante explaining that the French had less of appetite for kebabs because of the fact that “in addition to being hyper-calorific they are not always sure about the fact that sanitary standards have been respected”.
In the table above the blue column on the right shows which junk foods the French get the most pleasure out of eating and unsurprisingly, the order is consistent with which they eat most often.
But the survey didn't just look into which junk foods they eat and enjoy eating, it also looked at which foods they feel guiltiest about consuming. Nutella shame
France's love affair with the Italian chocolate hazelnut spread Nutella is well-known and if anyone was in any doubt the so-called “riots”, as described by some French newspapers (it was actually more of a frenzy) seen at supermarkets across the country in January, proved it.
But according to the study this love is something they feel very ashamed of.
In fact, even though Nutella came ninth on the list of junk foods consumed most often, it came top of the list of the junk foods the French are most ashamed of eating, with 15 percent of people saying they “often” feel ashamed for eating spreads like Nutella and 23 percent saying they “sometimes” feel ashamed.
Natura Sante says that this could be down to the negative image of the chocolate spread.
“Nutella has been criticised for years for both its impact on health (with around 50 percent of sugar content) and the environment (20 percent palm oil).
“In addition, following the 'Nutella riots' that took place in January in several supermarkets in working class areas, it is possible that the consumption of this food is now associated with the typical eating behaviour of those from disadvantaged backgrounds.”
READ ALSO: What the great Nutella riots of 2018 tell us about the French Photo: AFP
This theory seems to be backed up by the fact that the social stigma associated with eating Nutella is much higher among those who are at managerial level (53 percent) and entrepreneurs (47 percent) than among the unemployed (30 percent).
Even so, the shame isn't great enough to stop them consuming it and according to Paris food writer and author of the blog Chocolate & Zucchini Clotilde Dusoulier it could be this childhood link which is partly behind the France's love for Nutella.
“French people eat it by the spoonful. I had it on toast for breakfast as a child,” Dusoulier previously told The Local. “And like with candy, grownups continue to eat it to connect with their inner child.”
McDo-pro
Next on the list of junk foods the French are most ashamed of eating were sweets and salty snacks followed by hamburgers.
Much to the horror of any baguette lovers out there, burgers triumphed over the classic French jambon-beurre baguette for the very first time in 2017 in France's hard-fought fast food wars.
American-style burgers were on the menu at 85 percent of restaurants in France last year, with a whopping 1.5 billion units sold, according to Paris-based restaurant consultants Gira Conseil.
In general the French have a healthy appetite for all things “McDo” and are believed to scoff the most Big Macs per head of any country outside the United States.
But even though France's McDo-pro attitude is well documented, the love of burgers has spread beyond the boundaries of the US burger giant, with fast food joints selling just 30 percent of burgers in France in 2017 — the majority were sold at restaurants with full table service.
READ ALSO: Why do the French love McDonald's so much? Photo: James/Flickr
Next on the list of shameful junk food indulgences were ready meals, kebabs, chips and pizza, with chocolate and ice cream coming bottom of the list in terms of shame despite the fact that those are the junk foods the French people surveyed said they eat most often.
And perhaps unsurprisingly, it was French women who felt the guilt of eating junk food more strongly than their male counterparts.
Overall, 52 percent of French women feel guilty about eating junk food compared to 47 percent of French men.
Natura Sante puts this down to the greater pressure on women, particularly young women, to be thin.
Similarly, people living in certain regions were more prone to feeling guilty about their food habits, with the feeling of guilt is particularly strong in the regions where the obesity rate is higher. This includes the northern regions of France such as the Hauts-de-France where the feeling of shame linked to the consumption of junk food is highest at 55 percent and the east of France, including the Grand Est at 54 percent.
By comparison, this feeling is weak in the southern region of Occitanie (43 percent), the region with the lowest obesity rate in France (11.6 percent).