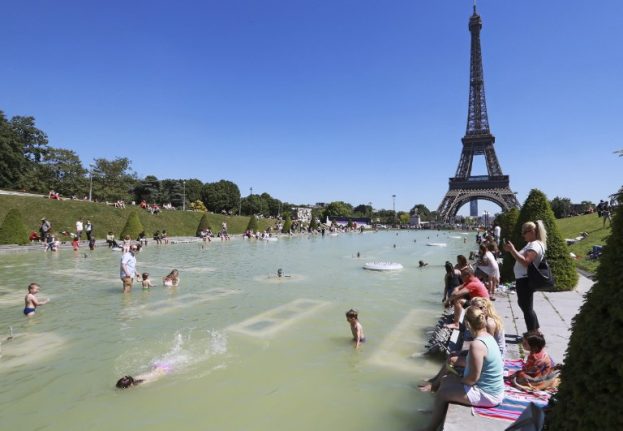 Photo: AFP
Nine departments in the greater Paris region of Ile-de-France and the north have been placed on orange alert — the second highest warning — for heatwaves by France's national weather agency Meteo France.
The departments affected were all those in the greater Paris region which are Paris, Essonne, Hauts-de-Seine, Seine-Saint-Denis, Seine-et-Marne, Val-de-Marne, Val-d'Oise and Yvelines as well as the Nord department in the north of the country.
“On Wednesday afternoon the temperatures will reach between 32C and 34C,” said Météo France which warned that temperatures would rise throughout the week.
As a result of the heatwave warnings the public are advised to spend at least three hours per day in a cool area (if you can find one) drink water regularly even when you are not thirsty and avoid going outside when the sun is at its hottest.

People in these areas are advised to remain vigilant due to the risk of dangerous weather.
Here are some tips on how to beat the heat.
READ ALSO: Photo: AFP
The warnings were put in place at 4 pm on Tuesday and are expected to remain in place until at least Thursday morning although with temperatures predicted to continue rising over the next few days, it's likely the warnings will be extended.
The mercury is expected to peak at 35C on Friday in the areas concerned.
In order to be considered an official heatwave (“canicule” in French), there must be three consecutive days of consistently very high temperatures throughout the day and night.
The temperatures constituting a heatwave vary according to region and in Paris the threshold is set at 31C during the day and 21C at night while in the north, the threshold is 32C during the day and 15C at night.
The mercury could rise to 35C in northern France and hit 40C in the Rhône Valley.
But if you'll be in these areas over the next few days, there's no need to worry too much because it is expected that temperatures will drop to a more comfortable level on Saturday.