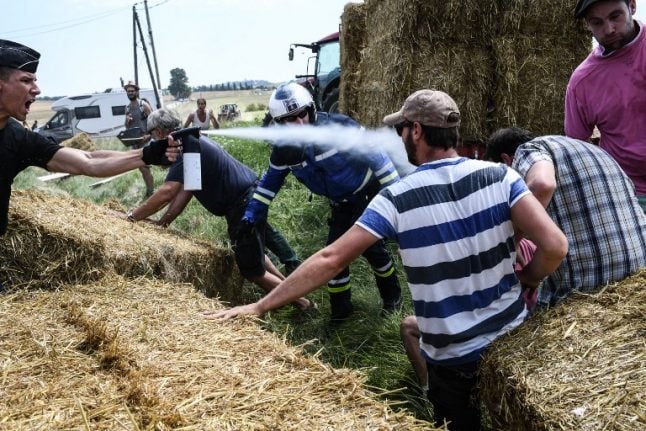 Bales of hay blocked the road 26 kilometres (16 miles) into the day's ride from Carcassonne as farmers demonstrated against a cut in state aid.

Among the riders affected by the tear gas was Team Sky's overall leader Geraint Thomas, who was pictured rubbing his nose following the incident.

Video footage of the incident appeared to show liquid being blown back into the advancing peloton after being sprayed by an officer from France's national gendarmerie against a protestor. The 218km stage with a finish in Bagneres-de-Luchon and featuring two first category climbs in the Pyrenees restarted at 12:36 pm (1036 GMT) after an interruption lasting around quarter of an hour.

“After a 15 minute-long interruption caused by protesters, the race is back on,” organisers said in a brief statement on leTour.fr.

This year's Tour de France has been marked by a series of incidents on the sidelines of the race including abuse directed at Team Sky and four-time champion Chris Froome.

Amid a general feeling of suspicion surrounding Sky and their sheer domination of the race, Froome has been spat at and manhandled, Thomas has been booed off the podium and some of Sky's staff have also faced abuse.