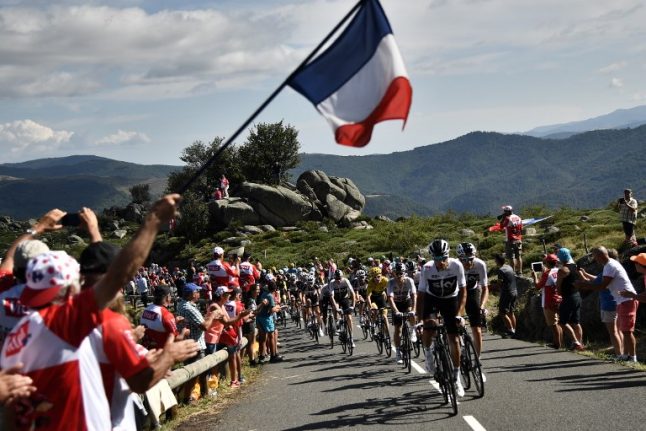 With Welshman Geraint Thomas in the yellow jersey and four-time champion Chris Froome in second place at 1min 39sec, Sky are in an optimal position as they head into the Pyrenees for three consecutive stages starting Tuesday.

But the British outfit's bid to win the French race for the sixth time in seven years is not sitting well with some fans.

Amid a general feeling of suspicion surrounding Sky and their sheer domination of the race, Froome has been spat at, Thomas has been booed off the podium and some of Sky's staff have also faced abuse during the opening 15 stages.

Brailsford was questioned by a British parliamentary inquiry following allegations Sky had breached ethical guidelines by abusing the legal
use of Therapeutic Use Exemptions (TUE's) for their riders.

Brailsford, whose performance in front of the parliamentary committee was described as “extraordinary” said did not expect the abuse on the Tour de France to stop. But he claimed the organisers' inability to step in and take effective measures against the haters had compromised the race's billing as the “the  world's greatest annual sporting event”.

“The Tour de France is promoted as the world's greatest annual sporting event. If that's the case, then maybe treat it with a bit more respect,”  Brailsford said on the rest day Monday.

“If you don't want international teams to come, you can have a Tour de France for French teams. That's the way I see it really.”

“I don't think spitting and throwing things really has a base in professional sport, nor in everyday life.”

Sky, though, started the race under a cloud.

Froome was initially barred from starting his title defence by organisers because of the suspicion surrounding his “adverse analytical finding” for the  asthma drug salbutamol at the Tour of Spain last year.

The Kenyan-born Briton had double the permitted amount of the drug in his sample when he won the race in 2017.

Yet days before the Tour, the International Cycling Union (UCI) cleared Froome to race. Brailsford said: “Chris's case was open when we raced in Italy. And they were fantastic, the Italians (fans).

“It seems to be the thing that's done here. It just seems to be a French thing. A French cultural thing really.”

He added: “I'm not sure they would like to have seen their (France) football players being spat at (the World Cup) in Russia.

“I'm sure there would have been a word or two about that. But it's okay to spit at us and our staff? It's very, very intimidating.

“It's a shame, but we're not going to let it distract us.”

Sky's victory bid was potentially dented when the team lost Italian rider Gianni Moscon on Sunday after he was thrown off the race for striking
Frenchman Elie Gesbert of the Fortuneo team.

Brailsford admitted the incident is unlikely to get fans on their side.

“It's certainly not going to calm people down,” he said.

But he added: “It's not acceptable for a rider to do that. I agree with the decision of the race commissaries.

“It's impact on the team overall means that some of the riders will have to do a bit more work.”