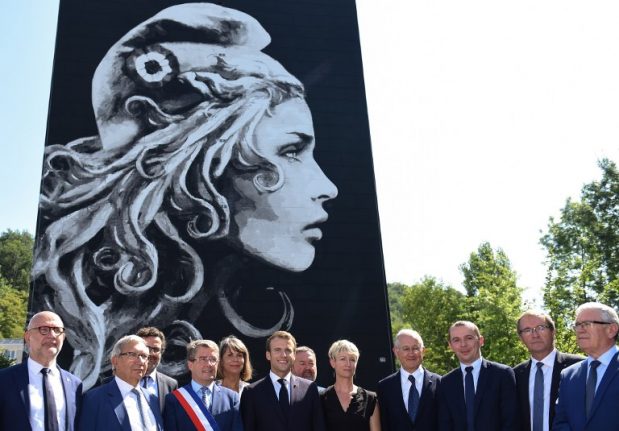 By custom each new president commissions a likeness of the woman who embodies the country's ideals of freedom and equality, perhaps best known from Eugene Delacroix's painting of “Liberty Leading the People.”

“I wanted this Marianne to be strong, proud and determined, with an unflinching look to the future,” the artist told the roughly 150 officials and guests at the work's presentation. The black-and-white face seen in profile is a sharp break from the more girlish and dewy-eyed version commissioned by ex-president Francois Hollande, her mouth slightly opened and hand raised over bared shoulders.

Macron praised YZ's “committed Marianne,” saying: “You were able to marry the reference to the phrygian bonnet with the freedom of her hair.”

The unveiling was just a few miles from the factory which is putting the face on French postal stamps which will go into circulation next week.

During his visit, Macron repeatedly brushed off questions about the scandal involving one of his top security aides, seen in a video hitting a protester during a May Day demonstration.

He was also confronted by a woman in her 40s who assailed the president's economic policies, saying she “no longer had the resources to live” because of higher gas prices and benefit cuts.

“If I thought things were going well I wouldn't be thinking about how to change them,” he responded during the roughly 10-minute exchange.