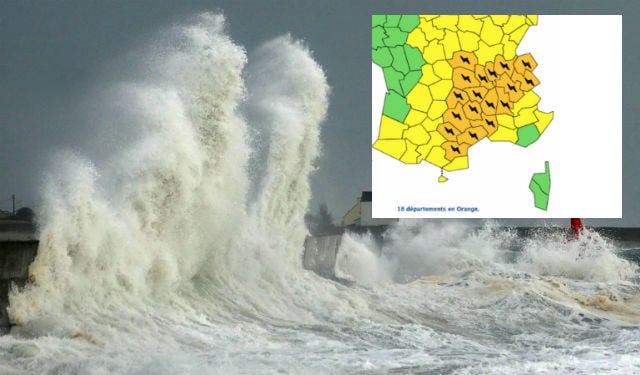 Météo-France have warned the general public of the possibility of “violent” summer thunderstorms hitting France’s Auvergne-Rhône-Alpes and Occitanie regions this Friday.

Thunderstorms are expected to be accompanied by heavy rains, hail and strong gusts of wind.

The country’s main meteorological body is referring to the phenomenon as “exceptionally stormy summer weather that requires special vigilance”.

A total of 19 departments are on orange alert (level 3 on a scale of 4) for severe thunderstorms.

Météo France has also placed a large part of the rest of France on yellow alert (level 2 of 4) due to the stormy weather expected.

In the Auvergne-Rhône-Alpes region , the placid morning weather will turn ugly as the storms start in the early afternoon on the northern part of the Massif Central.

The bad weather will then spread quickly in the afternoon to departments in the north of the region.

In the Occitanie region , there will be a few thunderstorms in the morning followed by some calmer weather, then during the afternoon new thunderstorms will develop and make their way from the southwest to the north-east.

Heavy rains of around 30 mm to 50 mm (30 litres to 50 litres per square meter) are expected to fall in less than an hour, accompanied by lightning, hail and 80 km / h winds.

According to France’s La chaîne météo weather channel, rainfall totals announced correspond to “the equivalent of three weeks of rain”.

Large mudslides may occur on sloping terrain with a risk of flooding at low points.