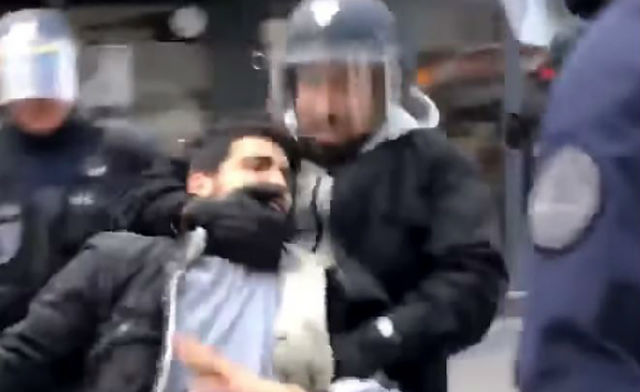 Alexandre Benalla, a security aide to President Emmanuel Macron, was filmed striking and dragging a protester to the ground in front of police during the traditional May 1st protest in Paris (see video below).

The clip caused outrage among politicians of all sides when it emerged this week and in a bid to quell the growing scandal the Elysée Palace confirmed on Friday that dismissal proceedings had begun against Benalla after new information came to light.

A new video clip emerged on Friday that also showed Benalla violently wrestling a women to the ground shortly before he struck the other protester. The woman was left in tears after the incident as the video below shows.

On Friday Benalla was also taken in for question by police over the incident. He faces charges of violence an imitating a police officer.

It also emerged on Friday that three police officers have been suspended after allegedly taking and copying CCTV images of the incident taken on Paris's video surveillance cameras. The officers handed the images over to Benalla, who was hoping to prove his innocence.

“He is suspected of receiving information from the police that he was not supposed to have,” said the Elysée Palace.

Le Monde newspaper published hte video showing Benalla striking and then stamping on a young man while wearing a police visor during a demonstration in central Paris on May 1.
Benalla, who is not a policeman and previously worked as a bodyguard, had  been given permission to “observe police operations” in central Paris during a day off on the May 1 public holiday, Macron's office said.
The presidential palace added that Benalla had been suspended for two weeks  after the incident came to light and had been transferred out of his job, which was organising security for Macron's trips.
“This sanction was to punish unacceptable behaviour and it was a final  warning before being sacked,” presidential spokesman Bruno Roger-Petit told reporters.
Prosecutors in Paris opened a probe on Thursday into possible charges of  violence by a public official, of pretending to be a policeman and the illegal
use of police insignia.
Imitating a policeman can lead to a prison term of up to a year and a fine  of 15,000 euros.
Benalla was the head of security during Macron's successful campaign last year, usually found several steps behind the then-candidate, and transferred to the presidential staff in May 2017.
Asked about the video and the investigation during a visit to southwest France on Thursday, Macron refused to comment, saying only: “I'm here with the people.”