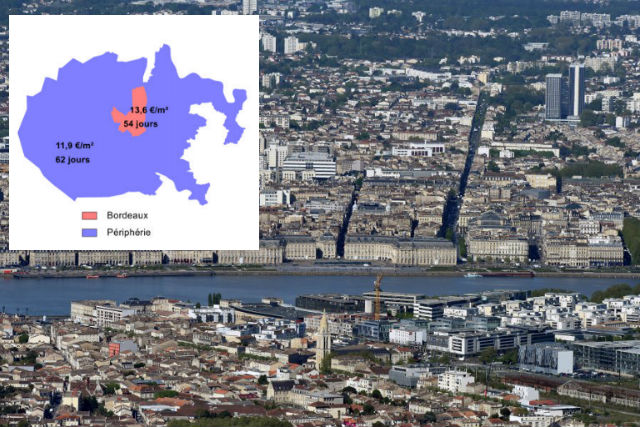 How do rent prices in Bordeaux compare to the rest of France? Photo: AFP
The study by France's national union of real estate agents, FNAIM, published on Wednesday, shows what people can expect to pay for rent in the country's ten biggest cities and their surrounding suburbs, according to figures collected from the first three months of 2018.
And it's unlikely to come as much of a surprise that the most expensive agglomeration for rent in France is its capital, Paris (see table below).
In the French capital, including the surrounding suburbs, tenants paid an average of €18.4 per square metre.
This figure doesn't only include the cost of rent within the 20 arrondissements but the areas outside the capital including the departments of Seine-Saint-Denis to the north east, Val-de-Marne to the south east and Hauts-de-Seine to the west — an area which is known as the Petite Couronne — as well as the area known as the Grande Couronne, which incorporates the rest of the Ile-de-France region.
READ ALSO: Paris rent prices – French capital ranked one of worst cities in the world Average rent prices in Paris and surrounding area
Unsurprisingly, prices are noticeably lower in the areas outside of the city's 20 arrondissements.
Within the city limits, the average rent price per metre squared is €29.3 while in the Petite Couronne, immediately outside the city that drops down to €19.5 per metre squared and in the Grand Couronne prices drop even further by metre squared to €15.4.
In Paris itself, tenants paid an average of €779 for a studio and €1,183 for a one bedroom with the overall average rent paid by Parisians calculated at €1,335 per month.
But these prices dropped dramatically outside the capital.
For example in the Petite Couronne the average amount spent on a studio apartment per month is €594 and €760 for a one bedroom apartment compared to the Grande Couronne where tenants pay €525 for a studio and €680 for a one bedroom.
It's worth noting that since August 2015, Parisian landlords in the 20 arrondissements have had to play along with the rent-capping law – known as the Loi Alur (or Loi Duflot as it was originally called). However, these rent caps, which have prevented landlords from hiking prices, are set to be abolished in a move that City authorities worry could see rents shoot through the roof.
Authorities have however vowed to introduce new regulations to keep a cap on rents in the capital.
READ ALSO: Photo: AFP
Hot on the heels of the capital were two spots in the sunny south of France; Nice in the French Riviera and the combined urban area of Aix-en-Provence and Marseille in Provence, referred to as Aix-Marseille.
When looking at the city of Nice and its outskirts combined the average cost of rent was significantly cheaper than the Ile-de-France region at €15.8 per square metre. Rent prices in Nice and suburbs
This worked out as €495 for the average sized studio apartment and €690 for a one bedroom apartment in Nice itself.
READ ALSO: People on the beach in front of the Promenade des Anglais in Nice. Photo: AFP
Meanwhile in the twin cities of Aix-Marseille the average cost per square metre was €12.7 which worked out as tenants paying €420 per month for a studio and €570 for a one bedroom apartment.
The table below shows the prices per square metre in the country's main cities. Somewhat surprisingly, the table put the two southern locations ahead of booming Bordeaux in western France where, despite costs shooting up in recent years, the average cost per square metre was €12.6.
This translated to an average price per metre squared in the city itself of €13.6 compared to €11.9 in the suburbs.
In Bordeaux proper the average cost of a studio was €453 compared to €595 for a one bedroom apartment. Rent prices in Bordeaux and the suburbs
These cities were followed by the port city of Toulon on the Mediterranean coast where it cost €12.1 per square metre.
In this picturesque city people paid an average of €408 per month for a studio and €560 for a one bedroom apartment.
The industrial urban area of Lille in the north of France was ranked sixth at €12 euros per square metre, with the average monthly rent for a studio came with a price tag of €431 and a one bedroom apartment cost €545. Lille city centre. Photo: AFP
Meanwhile the capital city of the Auvergne-Rhône-Alpes region and its surrounding urban area Lyon came in seventh with the average price per square metre calculated at €11.7.
The price of a studio flat in the so-called gastronomic capital of France will set you back €460 per month while a one bedroom apartment comes with a monthly price tag of €600. Rent prices in Lyon and its suburbs
The cheapest three cities on the list were Nantes in Brittany, France's 'Ville Rose' Toulouse in Occitanie and Grenoble in the Auvergne-Rhône-Alpes region which came in 8th, 9th and 10th, respectively.
The average price per square metre in Nantes was calculated at €11.4 while it was €11.1 in Toulouse and Grenoble.
In Nantes, often cited as one of the most attractive French cities, tenants paid an average of €387 for a studio per month and €500 for a one bedroom. Nantes. Photo: Jean-Pierre Dalbéra/Flickr
In the city of Toulouse itself that dropped to €380 for a studio and €495. Rent prices in Toulouse and its suburbs
In Grenoble the average studio cost €397 however the price of a one bedroom apartment in Grenoble were more expensive than either Nantes or Toulouse, coming with a price tag of €544. High demand
The study also looks into how long the turnaround is between an apartment going on the rental market and being snapped up (see table below).
“This is an indicator of the local market tension,” says Fnaim. “The longer the delay, the more it shows an abundant rental offer and sluggish demand.” And perhaps surprisingly for anyone who has struggled to get the apartment of their dreams in Paris, the French capital doesn't have the highest turnaround. In fact, it is Lille in the north where demand is highest with an average turnaround of just 23 days.
Meanwhile the French capital sat comfortably in the middle of the table with an average turnaround of 74 days.
And the big agglomeration with the least demand is Toulouse where the average turnaround is 146 days.
However that pales into comparison compared to Dijon where a flat is taken up on average 222 days after going on the market.
There was also a lengthy period before flats are taken up in the southern cities of Marseille ad Montpellier where the average turn around is 155 and 168 days respectively.