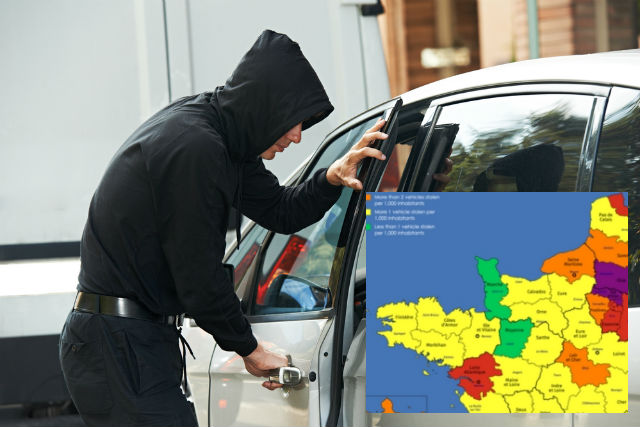 The chances of having your vehicle stolen – be it a car or a two-wheel ride -varies greatly depending on where you are in France.

For example, you are ten times more likely to have your vehicle stolen in Bouches-du-Rhone, home to the southern city of Marseille, than in rural Cantal in south-central France.

While that might not surprise you some of the date below and the map will give you an idea of why perhaps your car insurance bill is so high and where in the country you should really lock your car doors and where you can perhaps leave them wide open (not advised). Where is vehicle theft rife?

According to the French Interior Ministry’s latest crime statistics – which The Local has had access to – Bouches-du-Rhone saw a staggering 10,842 vehicles stolen in 2017.

That makes it the worst vehicle theft hotspot in France, with this type of crime affecting more than five in every 1,000 residents of this populated department of the south-east.

The peripheral Paris departments of Val-d'Oise and Seine-Saint-Denis are the two other departments on the podium for the most vehicles stolen, each of these areas recording more than 6,000 stolen cars and motorbikes in 2017.

They’re followed by neighbouring Oise, which also had a vehicle theft rate of more than 4 per 1,000 inhabitants.

Paris had the sixth highest rate of vehicle theft in France with 8,109 cars and two-wheel vehicles stolen in 2017.

Île-de-France is overall the region in France most affected by vehicle thieves. As the vehicle theft map below reflects, only its department of Yvelines is not ranked among the worst for stealing vehicles.

Other departments across France that are home to some of the country’s main cities follow the usual trend of the more urban and populated the area is, the higher the crime rate is as well.

These include Loire Atlantique (Nantes), Rhône (Lyon), Alpes Maritimes (Nice) and Nord (Lille), all of which had a vehicle theft rate of more than four for every 1,000 residents.

But two French departments with relatively small populations and no major cities – Gard in the south and Drôme in the south east(both coloured red in the map below) – managed to creep in the list of the 15 departments most targeted by car and motorbike thieves. How bad is vehicle theft in the French departments where most English speakers live?

Paris – the department with the highest number of English speakers in France (25,000), including the greatest number of Americans and Australians in l’Héxagone – saw more than four in every 1,000 residents report vehicle theft in 2017. That’s the sixth highest rate in the country.

The department of Alpes-Maritimes, home to the biggest concentration of English speakers on the south coast (over 8,500), recorded the 14th highest rate of vehicle theft in France. A total of 3,355 vehicles were stolen in the picturesque department that includes the Côte d'Azur towns of Nice, Monaco and Antibes.

Residents of south-west France will be relieved to hear that vehicle theft is not as rife as in the south-east of the country or in Île-de-France.

Dordogne, or Dordogneshire as it is often referred to due to its almost 8,000-strong British population, recorded the 15th lowest national rate with only 462 vehicles stolen in 2017, making it the safest place in the south-west for vehicle theft.

But Gironde and Charente Maritime, home to Bordeaux and La Rochelle, had vehicle theft rates which fell into the top third of France’s most affected departments, with 3,606 and 1,358 vehicle stolen respectively in 2017.

Several departments in France’s Occitanie region have high but not alarming rates of vehicle theft.

Aude, Haute Garonne, Pyrénées Orientales and Hérault all had more than 2 vehicle stolen for every 1,000 residents.

In Haute-Garonne, home to the city of Toulouse and popular with a wide array of English speakers including several hundred Irish and over 800 Americans, there were 2,969 vehicles stolen in 2017.

Are there parts of France where vehicle theft isn’t a problem?

There are a handful of departments in France where less than one person in every 1,000 is the victim of vehicle theft.

As you may have guessed already, most of these are in south-central France.

Cantal in Auvergne-Rhône-Alpes has the lowest vehicle theft rate in the country, with only 76 incidents reported last year.

Just below it on the map and on the rankings is Aveyron with 176 vehicle robberies and then the nearby department of Creuse in third with 80 incidents.

Other adjacent departments such as Lozère, Corrèze and Haute Loire make it into the top ten safest places for private vehicles.

Other areas of France where car thieves don’t try their luck too often are Manche in Normandy, where there were only 369 vehicles stolen in a department of half a million people, and just below it Mayenne, with just 233 vehicle robberies in 2017.

Gers is the safest department in Occitanie to own a car or motorbike, as only 175 were reported missing in 2017.

In the north-east of France, Bas Rhin scored a very low vehicle theft rate, less than one robbery for every 1,000 people. This department’s scores buck the trend of crime in France often spiking in urban areas as Bas Rhin is home to Strasbourg, a city of 270,000 inhabitants.

Are there any cars that are particularly at risk of being stolen?

A 2017 study by car magazine AutoPlus revealed the top ten cars stolen in France in that year, with the Smart Fortwo topping the list.

Second place went to the Renault Clio, which jumped from 6th place in the same list from 2016.

The magazine noted that it was “super easy” to jump start the Renault Clio, which probably explains why it's zooming up the list of stolen cars.

There are a whopping 285 cars stolen in France every day, the magazine noted, adding that this marked a 5.1 percent increase in the number of thefts across 2016. The magazine noted that the least stolen cars were those with electric keys like the BMW i3 and the Renault Zoé, or those with trackers like the Porsche 911.

A similar French study in 2017 by 40 Million d'Automobilistes showed that cars are most likely to be stolen when they're parked in a street.

“In 52 percent of cases, the vehicle was parked in the street, 31 percent were in a parking lot and 12 percent in a garage or a closed car park,” said the study.

SEE ALSO: Driving in France – The most common scams thieves try on motorists