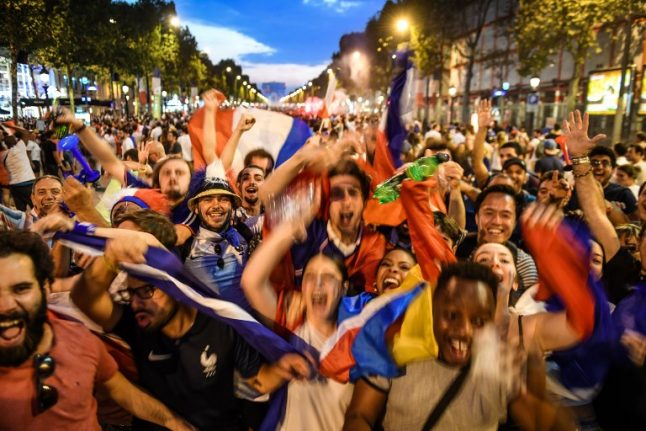 France's 4 – 2 win over Croatia on Sunday sparked boisterous celebrations at fanzones, bars and cafes across the country that went on long into the night.

But for a number of women the celebrations were ruined after they were sexually assaulted by male fans. Many spoke of how they had their genitals or buttocks groped or were forcibly kissed by men against their will.

Experiences started to be shared in the aftermath of the match on Twitter, notably by a woman who went by the name of Kateya.

“I'll let you observe the horrible evening that masculine sensitivity caused to too many women last night,” she wrote.

The hashtag #Metoofoot – or Me Too Football – a nod to the Me Too campaign in the wake of the Harvey Weinstein sex scandal – was soon set up gathering more testimonies together.

One woman wrote: “Thanks to the guy who will surely ruin my thoughts for a long time, who took the opportunity to fondle my vagina and my buttocks while I was semi-conscious on the Champs-Elysees. I feel bad, very bad.”

Another woman said a man took advantage of the chaos on the Champs-Elysées to grope her as she was being carried away by friends.

“All I will remember of France's victory is being sexually assaulted on the Champs-Elysees,” she said.

Another woman wrote: “A drunk guy just put his hand on my arse and tried to kiss me. I pushed him away and he grabbed me by the neck and said: “It's the victory, what were you expecting?”

Other women testified to being groped in one of the fanzones set up in cities across France, on public transport or just in the streets where crowds gathered to celebrate.

The World Cup final celebrations were slightly tarnished on Sunday night when there were outbreaks of violence in Paris, Lyon, Marseille and other smaller cities across France.

Police arrested almost 300 people around France, but it was not clear whether any of these were for sexual offences.

Police chiefs told 20 minutes website they had not received a spike in the number of complaints for sexual assault over the weekend, although many women who gave their accounts on Twitter or to media said they believed there was no point lodging a complaint with police.

But the French government department in charge of equality fired off a tweet warning people that “forcibly kissing a woman during the World Cup celebrations constitutes a sexual assault punishable by the law.”