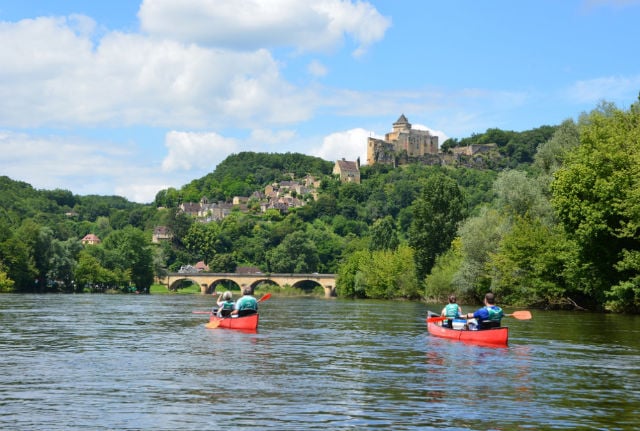 (Photo: Lynn Rainard/Flickr)
In recent years the South West of France has evolved into a genuine tourist hot spot thanks, in great part to the variety of travel, touring and holiday options it provides.
Unlike the Provence region, famous for its dry earth, Lavender fields and Azure sea, or the North with its wild forests, wild coastline and temperate climate, the South West marries a whole myriad of treats for travelers eager to enjoy a taste of everything even when time is limited to fortnight vacation breaks or long weekends. Discover a selection of the ten best, and perhaps unexpected,treasures the South West has to offer:
1. Europe's most impressive sand dune Dune de Pila(or Pilat) is more than a hill of sand.
This huge and majestic expanse of dessert rises off the Arcachon Peninsula and is not only dramatic in its height at 110 meters but by its width stretching out 500 metres wide and allowing for some of the most breathtaking views the entire region has to offer.
On a clear day, when standing atop the highest sand dune in all of Europe it is possible to see the Pyrenees off in the distance. Whether mid summer, or January 1st to celebrate the new year with hundreds of brave revelers, the Dune de Pilat) is a magnificent platform upon which to reflect, relax and enjoy a spectacular view. With the recent addition of a stairwell up to the highest point on the dune, for the first time the tip is more easily accessible for people of reduced mobility also, for whom the sand itself can be a challenge.
2. Remarkable Royan
Dubbed the most fifties town in France, the remarkable Royan, at the mouth of the single largest estuary in all of Europe – the Gironde Estuary, where the Dordogne and Garonne rivers meet the sea, has enjoyed one of the great architectural evolutions of the 20th century. Having once been an 18 Century hot spot when sea bathing became popular in the Victorian age, it also suffered severe damage during several periods of war, most recently WWII. However, what came out of this was a new passion for innovative design and architecture by the town council and community, re-imagining the city with an eye to the future.
The result was Royan welcomed some of the most avant-garde architects of the post-war era who turned this sheltered beach town into a haven for modern fifties design that is still unparallelled today. Step back in time eating at quintessential fifties diners, or check out some of the famous architectural landmarks like the 'Boomerang' house, the market shaped like a shell, and the Cathedral shaped like a ship. Try one of the most famous ice cream parlours in the whole region at Confiserie Lopez or explore one of several beautiful sheltered beaches.
3. Oldest functioning lighthouse in the world
If making the journey to Royan try and make time for the Phare De Cordouan. Now the oldest functioning off-shore light house in the whole world, which can still be visited, and the tenth tallest traditional lighthouse in the world, this famous beacon of light has known multiple periods of transformation much like Royan itself.
Taking one hundred years approximately to construct it is considered a renaissance masterpiece having been designed to encompass the aesthetic of a royal palace, the spiritual magnificence of a cathedral space and the durability of a war fortress. 4. The glorious Basque town of…
Biarritz is a town that still echoes with the glamor of a bygone age while also welcome surfers and tourists from around the world. Located in the Basque region you can enjoy the mix of French and basque culture here through the food, architecture and general vibe of the town. Perfect for an overnight or one day adventure Biarritz. It is also a center for spa and water based wellness so if relaxing is on the cards you can take a meander along its natural boardwalk, with jutting rock formations like Rocher de la Vierge, and then discover the Basque cuisine or fresh fish on offer down at the port, before taking in some geothermal treatments at one of the many popular spa centers around the area.
5. Take to the water
The Dordogne is already known for its beautiful forests and long meandering roads through hills and vales but if driving seems dull why not explore the region by canoe. (Photo: Roland Tangloe/Flickr)
This is a fun way to explore the region plus there are amazing pre-historic cave paintings also worth checking out at Rouffignac, estimated to be 45,000 years old.
With UNESCO world heritage status the caves are a remarkable reminder of mans relationship to art, communication and the land, going back to the dawn of Homo Sapiens… (Photo: Lynn Rainard/Flickr)
6. France's oldest surfing competition
If sports and high octane beach fun is your thing then it would be worth discovering the oldest surfing competition in France at Lacanau, known as the Lacanau Pro which has been running for thirty years as well as hosting stages of the elite World Surfing Competition. The best in the world can be found here in August each year and it is a sight to be behold when the surf is good. 7. This chateau…
Though tourists can easily pick and choose what vineyards and chateaux to explore in the world center of wine, one Chateau that has demonstrated an all together different kind of passion for design is Le Carmes Haut-Brion, with its spectacular, partially submerged new customized cellar designed by the world renowned French architect Philippe Starck and Luc Arsene-Herny. (http://www.les-carmes-haut-brion.com)
The design resembles a great shaft of metal piercing the Bordeaux earth and has been emblematic in demonstrating the modernity and innovation of various Chateaux in the region. Click here for more information.
8. More than just a drink
Known the world over Cognac is considered one of the jewels of the south west. This seemingly quiet and relaxed medieval town in the Charente is home to some of the most famous alcohol brands and houses in the world, most notably Hennessy, Remy Martin and Maison Martell. Each can be visited by tourists for tailored made trips and excursions but the Hennessy factory is a personal favorite, sitting on the bank of the river and offering a myriad of treats for families exploring the history of the area and the cognac houses that have evolved there over the years as world leaders in fine food and drink.
9. Largest Roman amphitheatre in the whole of the south west
Outside the Charente town of Jarnac discover the largest Roman amphitheater in the whole South West, known as the Theatre Gallo-Romain de Bouchaud, which could hold between 5000 and 6000 spectators when used. Now, this majestic and dramatic ruin can be visited through a small wood, surrounded by forests and farming land. It makes for a beautiful, secret picnic spot or off-the-beaten-track cycle pit-stop.
(Photo: Rouillac Tourisme)
10. Night owls
Lots of Bordeaux locals still don't know about the amazing off-the-grid owl cabins that can be stayed in for free on the banks of the Garonne in summer.

(Photo: Bordeaux Metropole)
Les Guetteurs are a part of an urban development project by the group Bruit du Frigo, and Zebra 3 that supports and curates urban, modern art. Developed with the backing of Bordeaux city the Owls do not have running water or power but can be booked for a nights stay during the summer season.
So if you or the family fancy a night out under the stars in your own owl cabin then book early.
Plenty of information is available online at this LINK HERE.