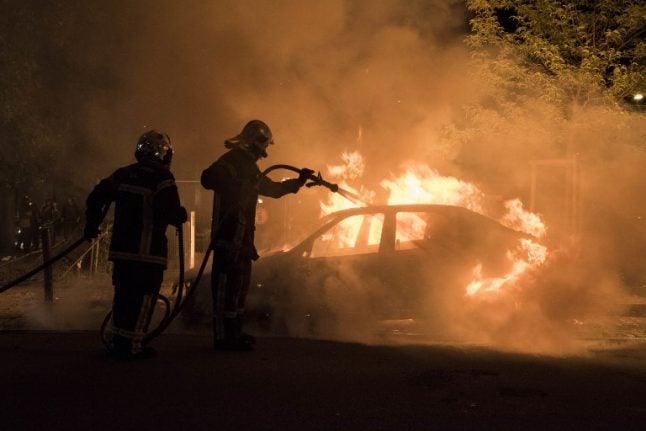 Burning cars is something of a tradition in France, albeit a much hated one. Photo: AFP

A total of 845 cars were torched across France on Friday and Saturday night, France’s Interior Ministry has reported.

Police have arrested 237 individuals, including 92 minors, for wreaking havoc in the Paris area, with 183 taken into custody.

In Montreuil in the department of Seine-Saint-Denis, a fifteen year old was arrested for carrying explosives in his backpack, which included fireworks, equipment to make a bomb, a bottle of acid, an empty plastic bottle and pieces of aluminum.

Two policemen suffered burns in a separate incident in Seine-Saint-Denis after three rioters threw Molotov cocktails at them. All of the attackers have been arrested, French TV channel LCI reported.

In the department of Val-de-Marne south east of Paris, about 30 people tried to crash a firefighters' ball without going through security checks, then launching Molotov cocktails and other projectiles at the crowd and injuring four firefighters in the process. Four people have been remanded in custody. Why do they burn cars in France again?

Burning cars is something of a tradition in France, albeit a much hated one by authorities and car owners.

But there are a few dates in the calendar year when the tradition is marked.

The most common torching dates are New Year’s Eve and in July and August, particularly on Bastille Day on July 14th when youths mark the annual fête nationale with their own firework shows.

“Vehicle fires are often associated with a context of riots and urban violence. It can also be a ‘game' to break the monotony, or it could be motivated by vengeance after a violent arrest. Or it could just be to get rid of a car used in a crime or as an insurance scam.” Christophe Schulz, of France's official crime data agency ONDRP, told Le Parisien newspaper.

'Resentment of the French identity'

French sociologist Michel Wieviorka said: “It should be noted that burning cars is not necessarily a militant act.

“It is first of all about showing one's anger and dissatisfaction, but also about asserting one's autonomy, one's ability to get out of the daily struggle. In the same way, we want to draw the attention of the media to say: “Me too, I exist … Me too, I party, my way.”

Gérard Mauger, a French sociologist from the CNRS think tank said the typical profile of those who burn vehicles is a youth, who has recently left school with no qualifications and little hope of finding work. They are drawn into the life of street gangs.

“The mass unemployment among young people without qualifications only favors the increase of this phenomenon [of burning vehicles],” said Mauger.

French criminologist Sebastian Roché says it's hard to analyse the burning of cars and the frequent attacks towards French police because those behind them rarely talk about their motives. However the fact they occur during national celebrations like July14th suggest their anger is a message to the state and a reflection of a “resentment against the French identity”.

“These are acts of delinquency,” said Roché.

“There is a desire on their part for conflict and destruction, whereas these celebrations should be the symbol of national unity,” he added;

“It is difficult to go much further in the analysis of these movements because their authors do not express specific claims. It is not a political movement or a demonstration, but these people want to express a rage and anger, so they attack symbolic events. “ Other analysts say one of the reasons why the custom continues is that the youths want the media attention on the number of cars burned in their suburb and are in a kind of competition with other neighbourhoods around France to see who can torch the most vehicles.

This was the reason previous government's in France have declined to reveal the number of vehicles burned for fear of stoking the problem.

The ONDRP revealed in Januart that the number of cars burned each year has fallen by 20 percent since 2010.

FOCUS: What's behind the famous French tradition of torching cars? 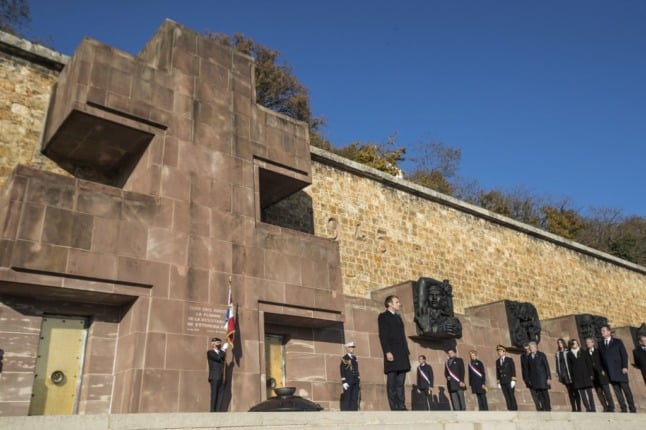