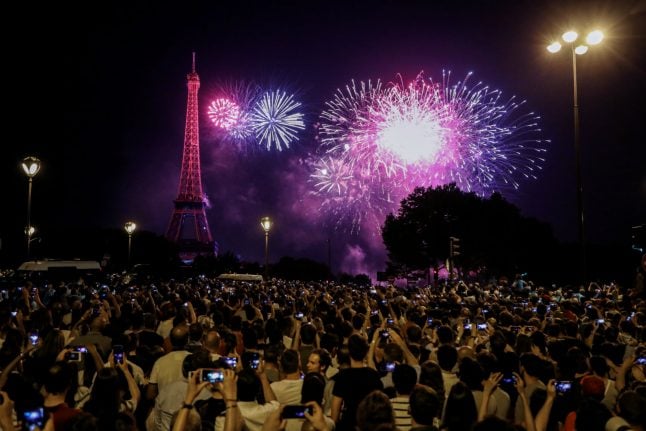 Fireworks in Paris on July 14th. Will they be repeated on World Cup final day? Photo: AFP

Thousands of people, many of them tourists, thronged the Champs Elysées avenue to watch the march, which involved 4,290 soldiers, 220 vehicles, 250 horses, 64 jets and 30 helicopters.

The theme of this year's Bastille Day was “fraternity in arms” and featured Spanish gendarmes, Belgian armoured vehicles and an Airbus A400M military transport plane from the German defence fleet. France's military chief Francois Lecointre who was appointed by Macron last year after his predecessor resigned following a spat over defence spending cuts, said the July 14th parade was a “demonstration of controlled force”.

Macron has since raised the defence budget and pledged to lift it further to two percent of GDP in seven years, in line with NATO guidelines.

“With this… we will address the shortcomings of the past, improve the present and prepare the future of our country by giving it the means to defend itself,” Macron said on Friday evening.

France is deploying 110,000 police and security forces nationwide this weekend to secure the huge street parties if the national team win the World Cup on Sunday.

The country has been repeatedly targeted by extremists over previous years in attacks that have claimed 246 lives since January 2015, according to an AFP toll.

“Everything is being done so the French can live these festive moments with peace of mind, despite the terrorist threat which remains at a high level,” Interior Minister Gerard Collomb said Friday.

The Eiffel Tower will be closed to visitors for the occasion, and police requested this week that it be shut on Sunday too when the World Cup final between France and Croatia will be shown on a giant screen in the shadow of the monument.

A secured fan zone for 90,000 people will be set up for the broadcast, one of about 230 such zones across the country.

“We will stop letting people in when this limit is reached,” Paris police chief Michel Delpuech said, urging fans “to arrive as early as possible, starting at 1:00 pm.”

READ ALSO: 'Winning World Cup would unite France, if just for a short while'