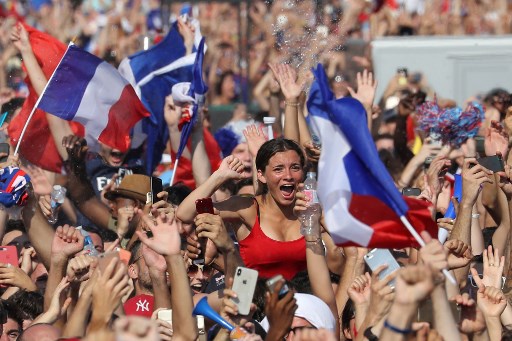 So, this just happened! France have just become world champions and millions of French people both at home and abroad are celebrating in style. There were scenes of jubilation throughout France as the ref blew the final whistle.

Here's how the party kicked off in Marseille…

And in Toulouse celebrations are getting off to a great start too.

A post shared by Triathlon Toulouse Métropole (@triathlontoulousemetropole) on Jul 15, 2018 at 11:40am PDT

In Lyon victorious fans are jumping into the fountains.

Hundreds of beachgoers in Biarritz are celebrating the win by doing a giant Viking clap.

Some at home can't stop dancing…

Others decided to go take a celebratory dip in Paris's Canal Saint Martin.

It's pretty clear it's going to be a night that's as long as it is mad! Millions are jumping and cheering in bars and cafés across France…. Paris's Arc de Triomphe is looking more triumphant than ever! And there's always room for a champion's kiss… And judging by this live video feed, thousands more are about to join them

In Vienne just south of Lyon, hundreds of fans are celebrating the win in the town's ancient Roman amphitheatre

Thousands of fans at Bordeaux's Chaban stadium have flooded the pitch and erupted in celebrations.

The Paris sky will be painted tricolor tonight