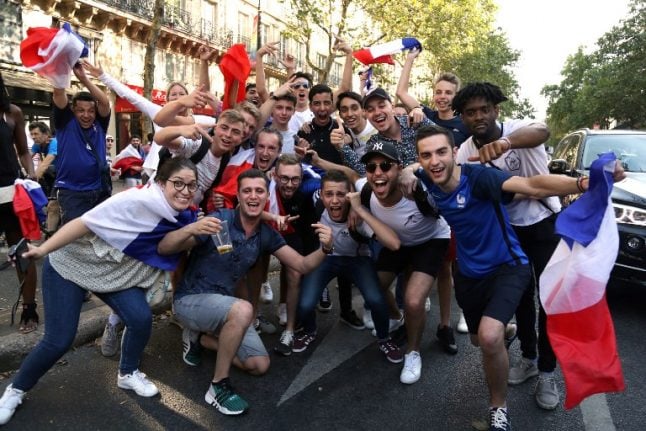 France take on Croatia on Sunday in the World Cup final and French fans are hoping a victory for the team will do more for the country than just spark huge street parties for the night.

Much of the build up to the final has focussed on the last time France won the World Cup back in 1998 when the success of the multi-racial team of “black-blanc-beur” (black-white-Arab) team prompted speculation that football would heal the division in French society. There is similar talk this time round.

Although no one expects a win over to Croatia by another multi-racial French team will heal a country where the far right National Front party picked up 11 million voices in the second round of last year's presidential election, they know it can't hurt.

Winning the World Cup would also be uniting in terms of national identity, just like it was last time around,” Yoni Ezra, 28, an entrepreneur from Paris told The Local.

“France was divided in 1998, but there was a sense of unity under one flag behind this team of players coming from different ethnic backgrounds but who are still french. It won't be a lasting impact but it will help.”

Mathilde Pittet, 27, a data analyst said: “I also think we have such a beautiful team with so much diversity and cohesion, and they all come together for a joint objective, it can change mentalities.”

There is also hope that the performance of the French team, many of whose players herald from poor immigrant suburbs where unemployment is high and hopes of breaking out of the cycle of poverty have been low, will inspire others.

“I would hope that the youth living in less privileged communities would see the success of many of these young players in the national team that may come from these same areas as inspiration that you can make it big in life, they can say 'I can do it too',” said data analyst Pittet.

But while football might inspire youths the reality is the routes out of the banlieues are limited.

“The only way out to make it here is in sport or rap,” said Ismail Gencel, the owner of a restaurant in the suburb of Bondy where French starlet Kylian Mbappé (pictured below) hails from. Historian Yvan Gastaut concluded in a 2007 article about immigration and football that France's 1998 World Cup win had led to nothing more than an “enchanted interlude”.

What we can be certain is that if France wins then the supports who will be watching in bars, cafés and at big screens across the country will enjoy that “enchanted interlude”.

If the scenes of jubilant supporters jumping on the top of buses and clinging from lampposts after the semi-final win over Belgium are anything to go by France will go wild once again on Sunday evening in the event of victory.

“Everyone will be in a good mood and most of all, we’ll party! We’ll party hard,” said Victor Chatin, 24, a cheesemonger from Clermont-Ferrand.

Bertrand Garreta, 52, Real Estate Agent, Paris said: “I remember 20 years ago, people celebrated for what seemed like an entire year.”

But of course not everyone in the country is interested. There will be a few who won't be glued to a television set tomorrow night, nor do they care who wins or loses, like Christophe Olibe, 33, Store Manager, Narbonne south of France.

“I don’t care about the World Cup because I don’t like football, it’s full of assholes,” he said.