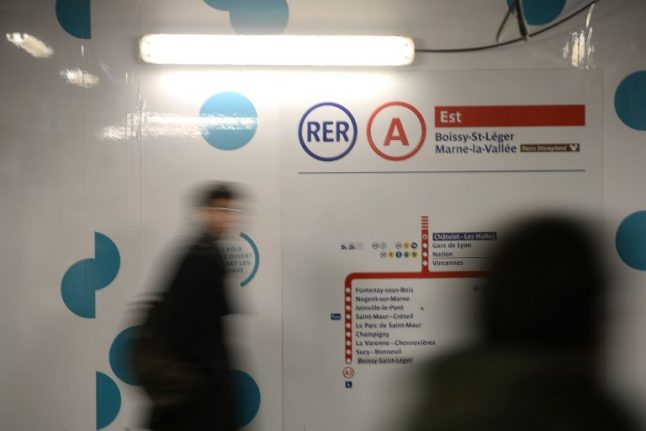 Here's how you'll be affected:

By far the most dramatic shutdown this summer will be the closure of the RER A between the stations of La Défense to the west of the city and Nation in the east from July 28 until August 26 inclusive.

Those two stations will serve as the terminus for trains and the stations of Charles de Gaule-Etoile, Auber, and Châtelet-Les Halles and Gare de Lyon will not be served at all during those four weeks. This is the third summer in a row that this stretch has been shut down in the summer so workers can upgrade the tracks and switches. This year the line will also be shut in the suburbs on the stretch between Maisons-Laffitte et Poissy for the same period.

RER C will also undergo works to the central section of the line this summer which as in previous years will see services suspended between the stations of Javel and Gare d'Austerlitz from July 15 to August 25th.

To compensate for the disruption extra services will run on Line 10 of the Metro and the number 63 bus. And a shuttle bus will run between the stations Javel and Invalides.

And also on the RER C there will be no services between stations Avenue Henri-Martin and Pontoise from August 13th to August 19th. Line 4 of the Metro system, which dissects the city from north to south and is one of the network's busiest lines, will suffer sporadic closures this summer. Workers will be upgrading platforms and installing automatic doors on them in order to prepare the line for full automation – i.e. driverless trains – by the end of 2022.

Marcadet-Poissonniers station will be closed until September 23, Barbès-Rochechouart will shut from June 29 until July 1 inclusive, and the stretch northwards from that station to Porte de Clignancourt will be closed from July 22 to July 26 inclusive.

Line 8 will also take a hit this summer, with the stations between Maison-Alfort Les Juilliottes and the terminus Créteil-Pointe du Lac closed between August 13 to August 17 inclusive. Line 11 also faces disruption over the next months. Its platform at République will close from June 30 to August 3, and Place des Fêtes station will be shut from September 4 to September 7.

The stretch between Châtelet and Arts et Métiers will be shut from August 21 to August 26 inclusive.

Line 6 faces minor disruption, with just one station – Chevaleret – due to close between July 2 and August 26 inclusive.

Tram travellers will also have to adjust their plans this summer as line T1 will be closed between Saint-Denis and La Courneuve-Six Routes from July 23 until August 19 inclusive.

T2 is de to shut between La Défense and Parc de Saint-Cloud from July 2 to July 20 inclusive.

The biggest disruption this summer is expected to be the temporary closure of the A86 motorway in the northbound direction at Rosny-sous-Bois between August 8 and 14. The closure is due to work on extending metro line 11.