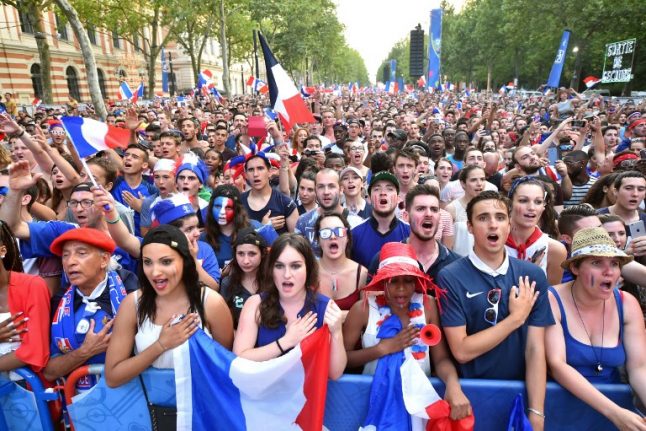 Photos: AFP
Let's start with the easiest.
Allez les bleus!
This literally means “Go the blues” and is perhaps the most popular phrase of French football. Pronounced “allay lay bleugh“, you can shout it before, during, or after the game. If you'd prefer, a similar version is “Allez les gars” (Allay lay garr) which means “Come on guys” in a kind of encouraging tone.
And if you want to urge France to score a goal then just shout allez! it's basically their version of come onnnnnn! Anyone not jumping is not French
There will likely be a moment during the final when all the French fans start jumping and chanting and you might want to jump with them.
They will likely be going through an old chant that basically says anyone who is not jumping isn't French or in the native language: “Qui ne saute pas n'est pas Français”.
Now you might feel it would be disingenuous to join in, but why not. No one will check your passport. And it's all good fun. See the video in the tweet below.

The French won the World Cup semifinal and they danced on the streets in Salou. Including this man and his dog. Made my night! ?#FranceBelgique #FRABEL #WorldCup18 pic.twitter.com/2cmTTHGINH

“On est en finale”
Another popular song that you'll likely hear break out in the street or in bars in the run up to the final is the very simple: “We're in the final” or “On est en finale”.
You can hear it in the video below.

And don't be surprised if you hear a song about French actor Gerard Depardieu.
He has nothing to with Les Bleus but it's a reference to Depardieu taking on Russian citizenship.
The words go something like this: Gerard Depardieu, get your vodka out for us, we are going to win in your country.”
Here's the French version below.

Goal!/Oui!!!/Buuut!
While the Brits may say “YEAHHH” and the Spanish will say GOOOOOL to celebrate a goal, the French seem to have a couple of options. They might shout “BUUUUUT” (or “goal”), a caveman-esque OUUUUUIIIIIII (or YESSSSSSS), or just GOAAALLL in English.
Here's our Facebook video from Euro 2016. You be the judge.
Comédien
The French won't hesitate to call out an actor, so if someone looks like they're faking an injury then yell out “comédien”.
Pénalty
The French will shout this, or more likely “Pénaltyyyyyyyyy” if they think France deserves a penalty. Putain!
This, as we've written before, is one of the most versatile and important swear words in French. It's roughly the equivalent of “shit”, and is useful to say when something astonishingly good happens (pu-taiiiiiiiin) or when something terrible happens (PU-TAIN! or Puttaaaaaaaaaaaaiiiiiiiiiiiiiiin).
There are two ways to pronounce it. The first is puTAIN (pronounced poo-TAHn), the other drops out the u and becomes almost one syllable, so p'TAIN (pTAHn).
And if things are not going well for Les Bleus we can expect the frustration levels to boil over and the swear words to really come firing out.
Putain will become putain de merde if Croatia score, and if they score again it well then feel free to use putain de bordel de merde in sympathy with your frustrated French friends.
—–

CLICK HERE to support The Local.
—–
Hors-jeu!
Feel like an opposing player is offside? Then yell out “hors-jeu”. Pronounced: orr zheurgh. Arbitre carton jaune!
Does a player deserve a yellow card? Then tell the ref, of course. Just yell out something that sounds like “Arrbeet karton zhonne”.
But the reality is you will normally hear the French most football fans insulting the referee when he makes a decision they don't like, in which case if you want to join in you could say:
Arbitre enculé! – which basically means you bastard referee, a phrase we obviously don't condone.
The classic refereeing insult in French is Aux chiottes arbitre! which literally means “to the toilet referee!” You also might hear these words a lot: Putain d'arbitre.
And another word you can shout at the referee if you think a French player has been fouled is Faute! If he doesn't give the foul then see above for how to react.
Many French fans won't hesitate to yell out payé after a bad call, suggesting the referee has indeed been paid off.
Main!
This word, pronounced kind of like “marn”, is what you should yell if a player appears to touch the ball (or “handball” in English).
Quel but!
Lastly, shout out “quel but” or “What a goal!” when Antoine Griezmann scores the winner.
And the national anthem
La Marseillaise
You really need to learn the lyrics to the French national anthem, as it will be a huge moment before the match (and will usually be sung two or three times during the match as well).
If you can't remember the words or can't pronounce them, have our little cheat sheet handy (below). And here is the tune thanks to a video from our Facebook page during Euro 2016.