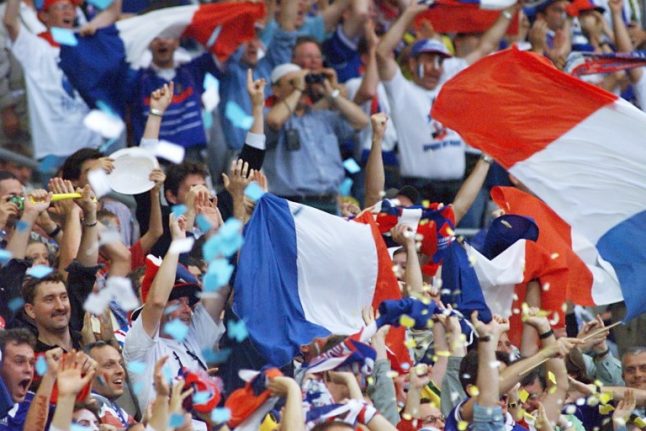 AFP
If France wins the World Cup on Sunday, the entire country will erupt in a victory celebration, Les Bleus will be hailed as national heroes and the French will be swept up in collective ecstasy, just like they were in 1998 when their team last won the golden trophy.
But does the country have more to gain from winning the tournament than a few days of euphoria?
Studies show that winning the World Cup doesn't only put people in a good mood, it has a positive impact on the economy. After France's 1998 win, French GDP grew by 6% in the quarter that immediately followed, and by 3.4% that year .
More broadly, an ABN Amro study that focused on the economic impact of the World Cup since the 1970s found that, on average, the economy of victorious countries grew by 0.7% compared to the previous year. Nations which lost the final however saw their economy dropping by 0.3%, according to BFMTV.
Winning the World Cup can boost the economy for several reasons. Even if the effects are often short-lived, people tend to spend more, they go out to bars and restaurants, and they splash out on food and sports gear for example. Winning also attracts more business investment.
“It's easier to strike up business relationships and investment with a country that is in the limelight, and football can help to build up the right contacts,” the study explained. When consumer confidence gets a boost, this also has a positive impact.
Essentially the theory is that happiness has a strong effect on the consumer. When people are joyous after a World Cup win, they are more likely to go out and buy a new car or an apartment or even a holiday that might have been deemed too expensive before.
What are the other possible effects of the World Cup? In 1998, after France won the tournament on home soil, there was hope the positive momentum would ripple through society.
Like today's team, back then Les Bleus hailed from diverse ethnic backgrounds. Among them was star Zinedine Zidane, of Algerian descent, Lilian Thuram who was born in Guadeloupe. and Marcel Desailly who was born in Ghana. At a time when the far-right National Front was gaining ground, the win was hailed as a victory for multicultural France.
There was hope that the team's win would help heal some of the country's ills, notably the division over French identity and problems of discrimination towards youths of poor immigrant backgrounds.
But it soon became clear that any expectation of a more united and integrated “Black-Blanc-Beur” (Black-White-Arab) France was futile. The same deep-rooted race problems remained long after the final whistle.
The World Cup win, historian Yvan Gastaut concluded in a 2007 article about immigration and football, had led to nothing more than an “enchanted interlude”.
France's anti-racism campaigner Mouloud Aounit said: “The politicians thought they had solved all the problems through football. In fact, the effect lasted about as long as the fireworks.”
Four years later, far-right National Front leader Jean-Marie Le Pen, who has been convicted of Holocaust denial and racist hate speech made it through to the second round of the presidential elections, leaving many in France stunned and ashamed. (The victorious so-called Black-Blanc-Beur team of 1998. AFP)
While that ended in a crushing defeat for Le Pen, the National Front, now known as the National Rally, has grown in influence once again in recent years with Marine Le Pen picking up nearly 11 million votes as she lost out to Emmanuel Macron in the 2017 presidential run-off.
But would a win for the Black-Blanc-Beur class of 2018 led by the 18-year-old Kylian Mbappé (photo below) from the Paris suburb of Bondy have more luck in changing attitudes and creating harmony?
Probably not. And there is far less speculation on the potential positive impact of a multi-racial French team this time around.
Speaking about the 1998 World Cup win, former president François Hollande said recently: “We wanted to draw the conclusion that this victory would change French society. It didn’t change it. It’s up to politicians to change it.”
READ ALSO: One positive measurable impact of the World Cup, however, is on reducing suicide rates in the country. During the 1998 World Cup in France, suicide rates dropped by 10% during the tournament, with the largest drop among men aged 30 to 44. On the day after a France match, the rate fell by 20%.
“The best way to prevent suicide is to build links between people,” French researchers told France Info, which quoted suicide expert Maria Bradshaw. “When the World Cup is on, people feel they have things in common with other people. Even if you feel like an outsider, you end up supporting the same team as others, and wanting the same thing as them,” she said.
One person who will be hoping to get a boost if France wins is Emmanuel Macron, who will be in Moscow on Sunday to support Les Bleus. The French president's popularity ratings are falling – a recent Odoxa poll showed that 75% of the French feel that he is removed from the people.
READ ALSO: In 1998, the-then president Jacques Chirac's popularity ratings surged after France won, but as Frédéric Dabi, head of Ifop polling agency suggests, this was probably a one-off.
“1998 was an exception,” he told L'Express. “Jacques Chirac was in a coalition government at the time… and he was therefore exempt from any criticism regarding social or economic issues.”
According to Dabi, France's Euro championship win in 2000 and its defeat in the 2006 World Cup final had no impact on the French presidents at the time, although Macron – who is sometimes dismissively called the 'president of the rich' – may reap some short-term benefits.
“Football can bring him a little closer to the French: it is a sport which can eliminate some social differences,” Dabi said.
So all in all if the French win on Sunday they should just enjoy the glorious “interlude” as long as it lasts and then hope their politicians can solve the real problems.