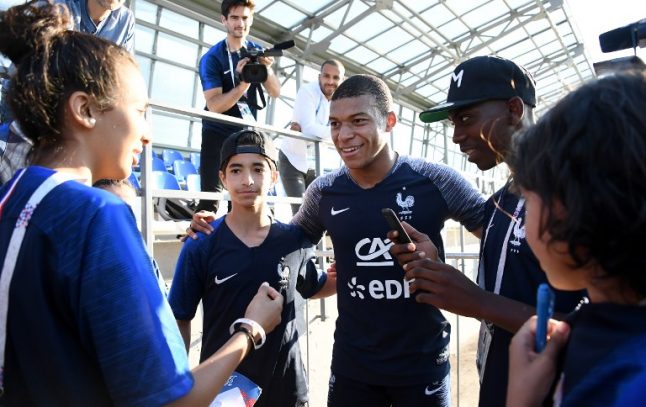 In a housing estate in the gritty northern Paris suburb of Bondy, Adama Wagui showed off the stack of trophies he has accumulated during his budding football career.

“Best goalkeeper AS Bondy 2016, best goalkeeper Vichy U17 tournament,” the tall 16-year-old with the shaved zig-zag footballer haircut said, reading
aloud out the inscriptions on the cups that his parents keep on their bedside table.

Wagui's finest hour, however, may have been when he was called on to block shots from local wunderkind, star France striker Kylian Mbappe. “It was difficult,” he says with a shy smile, “but sometimes I succeeded.”

As excitement builds at the prospect of Les Bleus taking home the World Cup, 20 years after their win on home soil, their success is a source of pride in the deprived estates or “banlieues” where many of France's players honed their game.

Of the 23 players in the French squad, around two-thirds are of Arab or African descent, drawing comparisons with the mythologised “Black-Blanc-Beur” (Black-White-Arab) team of 1998.

Their legend looms large over the tower blocks that dominate the skyline of northeast Paris. 'They live for football'

Standing on the pitch at AS Bondy's home ground, coach Antonio Riccardi recalls the almost freakish talent of a young Mbappe, slaloming Maradona-style past five defenders to ram a ball into the back of the net.

“The best players come out of these neighbourhoods because the kids here are always out kicking a ball,” Riccardi told AFP. “They live for football, whether at school or on the estate.”

Like Paris Saint-Germain's Mbappe, whose parents have Cameroonian and Algerian roots, many were born into immigrant families.

But few make it out of the “banlieues”, trapped in a cycle of poverty, discrimination and underachievement that President Emmanuel Macron has compared to being “under house arrest” and former prime minister Manuel Valls criticised in 2015 as “apartheid”.

“The only way out to make it here is in sport or rap,” said Ismail Gencel, the owner of a restaurant in Bondy.

While Mbappe, born five months after France's 1998 victory, dreams of joining the pantheon of World Cup winners, Adama dreams about following in his footsteps, out of Bondy into the big league.

The task of managing his expectations falls to his coaches.

“We tell them there is only one Messi, only one Ronaldo, only one Mbappe, and that the road to success cuts through school,” said Jeremy Mimouni, another coach at AS Bondy. Because there is only one Mbappe, his 50,000-strong hometown, which extends on either side of a motorway linking Paris to Charles de Gaulle airport, is intent on capitalising on his renown.

“Bondy, the town where anything is possible,” read a giant poster of the player that was pasted across a block of flats overlooking the motorway after
he was signed by PSG last year.

Football aside it does not always feel that way, however.

Unemployment in the region where Bondy is situated is running at 11.8 percent, compared to 7.1 percent in Paris.

Weeds push up through the pavement outside the block of flats where the Wagui family lives and all the kids chasing a football around a nearby
basketball court are black, highlighting the sense of segregation between central Paris and its suburbs.

But if football does hold up a mirror to French society, the relationship between the public and the national team has not always been a happy one.

Players from the suburbs were being blamed for a mutiny at the 2010 tournament in South Africa, which ended with France crashing out in the first round.

The slurs against some of the heroes of the “banlieues”, such as striker Nicolas Anelka, left scars in places like Bondy.

Another World Cup win for a multi-ethnic team, coming as polls show French attitudes towards migrants hardening, “would create some positive momentum and unite people for a while,” Riccardi said.

“But would it last?” he wondered. The win, historian Yvan Gastaut concluded in a 2007 article about immigration and football, had led to nothing more than an “enchanted interlude”.