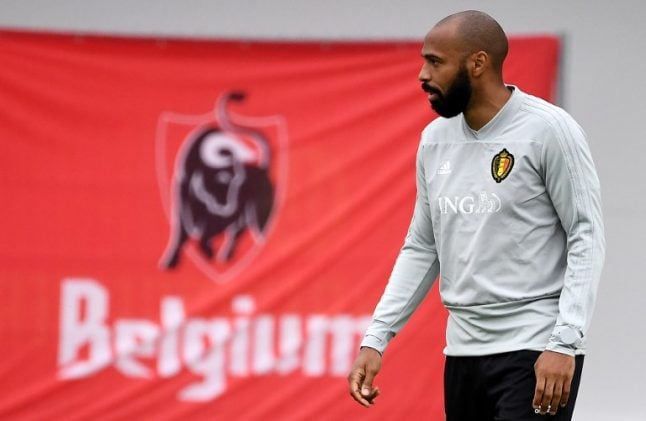 Henry, who was part of the France squad that won the 1998 World Cup on home soil, has been assistant manager to Belgium boss Roberto Martinez since 2016 and has helped guide the Red Devils to the last four of a World Cup for just the second time.

“His heart will be divided,” said French captain and goalkeeper Hugo Lloris.

“He is first and foremost French. But tomorrow, on a professional level, he will be putting all the passion that drives him into the Belgian team.”

On social media networks in France, where the nation's most hot-headed and opinionated commenters tend to hang out, Henry has even been branded a “traitor” for taking a role with the Belgian national team.

Coming to Henry's defense was former team mate and fellow World Cup winner Emmanuel Petit who slammed the criticism of Henry as “a load of rubbish”.

So too, to be fair did many others, but it's clear the presence of Henry among the Belgian ranks has added extra spice to Tuesday's mouthwatering World Cup semi final clash.

While Henry might be France's all time top scorer his infamous “hand of frog” handball to help France get o the World Cup in 2010 only to help orchestrate a players' strike once there means he is not quite the most loved of France's 1998 World Cup winning side.

The row over Henry's role has been raging for days and if Belgium win and Henry is caught on camera showing any kind of smile, we can expect him to become France's official public enemy number one. The irony that a player who scored 51 goals in 123 international appearances and helped France become world and European champions is now
plotting to stop them reaching the final in Russia is not lost on the current French team.

“It will be bizarre to have him up against us,” forward Olivier Giroud said. “He is a living legend of French football.

“He has given so much to the France team and we have got a lot of respect for what he has done.”

“But of course I would be proud to show 'Titi' that he has chosen the wrong camp,” Giroud added, using Henry's French nickname.

“Perhaps he will sing the Marseillaise (before the game), which I find normal,” De Bruyne said.

“It might be a bit difficult for him but he's working for Belgium now, he wants us to win.”

'Lost sight of him'

After spending most of his career at Premier League club Arsenal and putting down roots in England, 40-year-old Henry has had little involvement in
French football despite being one of the most popular players that France has ever produced.

French Football Federation president Noel Le Graet told AFP pointedly that “we've rather lost sight of him and he has little contact with the federation”.

“Life can be like that sometimes. He has been in England a long time and personally I have very little contact with him,” Le Graet said.

He said Henry had made Belgium into “a team that likes to attack”.

“The strikers go to him, they respect him,” he said.

Henry had little previous coaching experience and the president said he had “probably chosen the right solution” by taking the job of an assistant.

He compared Henry's early steps in coaching to those followed by Zinedine Zidane at Real Madrid before he took the top job and went on to win three Champions League titles in a row.

“It is definitely better to start as assistant in a national team, even if he was hoping it would be in Arsenal's staff,” Le Graet said. “There is no
doubt that he has a career in coaching ahead of him.” Henry, now sporting a thick beard, is happy to remain in the background as Martinez, a former manager of English clubs Wigan and Everton, does the
talking to the media.

He joined the Belgium setup in 2016 just after Martinez was appointed and reportedly set to work immediately with forwards Romelu Lukaku and Michy Batshuayi.

Though a very different player from the elegant Frenchman, the powerfully built Lukaku showed a touch of Henry in his intelligent dummy that allowed the ball to run through to Nacer Chadli to score Belgium's winner in the thrilling come-from-behind 3-2 win over Japan in the last 16.

Jean-Marie Pfaff, the Belgium goalkeeper when they last reached the World Cup semi-finals in 1986, told AFP's German sports agency SID that Henry would be “France's main opponent” in the semi-final.

“He plays an extremely important role for Martinez,” Pfaff said. “Martinez regularly asks him for advice and he listens to it. I think that Thierry Henry can be credited with some of the tactical ploys.”

Giroud, who like Henry was an Arsenal forward until he joined Chelsea last year, wishes Henry were on the French staff.

“Of course I wish he was with us and was giving advice to me and the other strikers. But we can't be envious. It is not something that shocks me because it is a normal move at this stage in his career.”

France defender Lucas Hernandez said he was sure Henry would be happy if France beat his employers on Wednesday.

“He'll be happy if we win because above all else he is a Frenchman,” the 22-year-old left-back said.