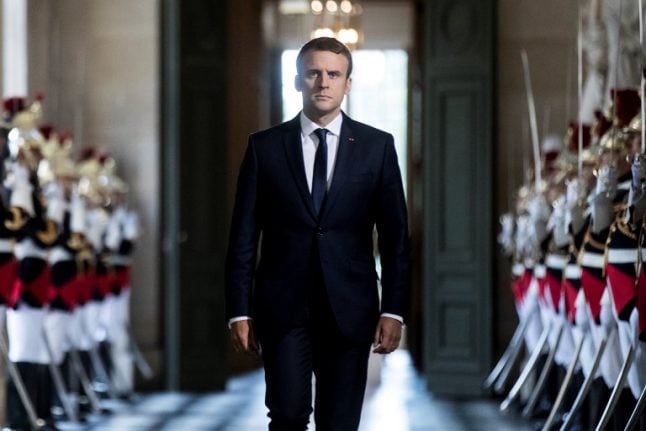 His office has given little indication of specific issues Macron will cover during his hour-long speech, though reforms of the pension system and a plan for tackling poverty are expected next year.

Lawmakers also begin debating Tuesday Macron's call for constitutional changes aimed at streamlining the legislative process, including shrinking the number of seats in the National Assembly and the Senate by a third.

He also already pushed through corporate tax cuts and an easing of labour laws, education and housing overhauls, and a revamp of the state rail operator
SNCF despite stiff union resistance.

But a growing number of critics, including some in his own centrist Republic on the Move party (LREM), accuse the former investment banker of neglecting the concerns of voters on the lower rungs of the economic ladder.

Recent comments that France spends “a crazy amount of dough” on social security programmes did little to soften his image as the “president of the rich”, as he is called by opponents.

Macron's regal, top-down style has also raised hackles, with some MPs on the both the left and right boycotting his Versailles speech as the latest sign of a “monarchical” drift.

They cite in particular his threat to override resistance to his parliamentary overhaul by calling a referendum “if necessary”.He has transformed “an optional and rare presidential address into an annual speech to which lawmakers can only respond by their absence, without any vote,” the rightwing Republicans MP Annie Genevard said.

“Tomorrow we're going to get a long speech on 'my life, my work' that will be all about him,” Christian Jacob of the Republicans told French television Sunday.

Macron has also taken heat over the cost of bussing out hundreds of lawmakers to France's former royal seat and deploying dozens of Republican Guards who will flank his ceremonial entry — estimated at 300,000 euros ($350,000).

The Versailles speech could be a chance for Macron to address his critics and burnish his social justice bonafides in the face of wavering poll numbers.

An Odoxa survey published Thursday found that just 29 percent of respondents thought his policies “fair”, and while 75 percent declared him “dynamic”, only 45 percent considered him “likeable”.

“The president will lay out the principles of his action for the coming year and put them in perspective, but it's not a speech for going into the details of his announcements,” a source in his office told AFP.

“I hope he's going to talk about poverty,” said Senate president Gerard Larcher, referring to a plan which was supposed to be announced this month but has now been pushed back to September.

Macron has vowed to slash state spending, among the highest among wealthy countries relative to its economy, in order to balance the French budget for the first time in over 40 years.

He has said he wants to make aid programmes more effective in terms of getting recipients out of poverty.

Yet the president himself has given fodder to critics, after reports emerged recently that he and his wife Brigitte had ordered a lavish new set of porcelain tableware for the Elysee Palace costing some 500,000 euros.

“A shift is expected from policies based solely on accounting and budget logic,” LREM lawmaker Frederic Barbier wrote in a Le Monde article on Saturday.

“Even if we see some social advances, the balance still hasn't been found,” he said.

Macron is only the third French president to address lawmakers at Versailles in recent memory, and the first to do so twice, following Francois Hollande after the Paris terror attacks of November 2015, and Nicolas Sarkozy in June 2009 after the global financial crisis erupted.