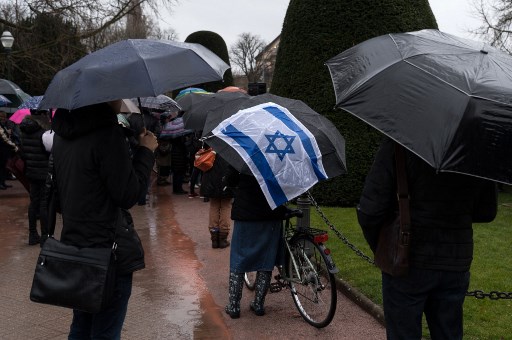 Abdou Salam Koita, 26, and Ladje Haidara, 23, who committed the rape were in court to hear the verdict.

Houssame Hatri, 22, who made the antisemitic slurs during the attack in December 2014, remains on the run.

They were given jail terms of eight, 13 and 16 years respectively by the court in Val-de-Marne, southeast of the French capital.

The three were hooded and armed when they attacked a young couple in an apartment in the Creteil suburb of the French capital.

During the attack they bound and gagged their victims before searching the apartment and making off with jewellery and bank cards.

“Jews do not put money in the bank,” one of them was heard to say.

During the attack Hatri also said that it was “for my brothers in Palestine” before suggesting they should “gas” their victims with teargas.

Defense lawyer Marie Dose denied her clients were antisemitic, saying instead that “they were ignorant”.

Jonathan and Laurine, the victims of the attack who are both aged 23, were at the home of Jonathan's parents when the attack happened.

The female victim, just 19 at the time, was raped.

Hatri asked her if she was Jewish, the court heard. “I am nothing,” she replied.

Following the crime the French government declared the battle against anti-Semitism to be a “national cause”.