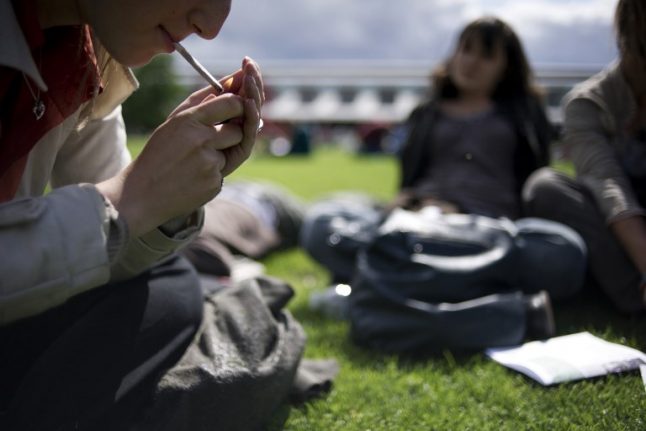 File photo: AFP
The ban will affect four parks and gardens in Paris from the summer for a four-month period and will be rolled out across the city from the autumn.
The move, which City Hall hopes to eventually make permanent, is the latest attempt to cut down on smoking in France.
“The goal is to fight smoking and the trivialization of cigarettes among the young and to respect non-smokers,” said Paris councillor Laurence Goldgrab.
But it isn't only about encouraging Parisians to stub out their cigarettes — it's also about cleaning up the city's parks, say authorities.
READ ALSO: “In 2017 Paris City Hall issued nearly 21,000 tickets to smokers throwing their cigarette butts on the floor. We also installed cigarette bins… but we still clean up 350 tons of cigarette butts every year in our City,” said Goldgrab.
Strasbourg became the first French city to introduce a smoking ban in parks on July 1st and smoking was banned in children's playgrounds in the French capital three years ago.
After evaluating the ban in the four parks, the experiment will be extended to all of the city's parks and gardens in the autumn, a representative from Paris City Hall told Le Parisien.
So far, the four parks set to test the smoking ban have not been selected.
During the test period, there will be no penalty for those who continue to smoke in the parks unless they throw their butts on the floor, which can already result in a fine of 68 euros.
However Laurence Goldgrab believes that the ban will be respected as is already the case, she said, in the city's 500 playgrounds.