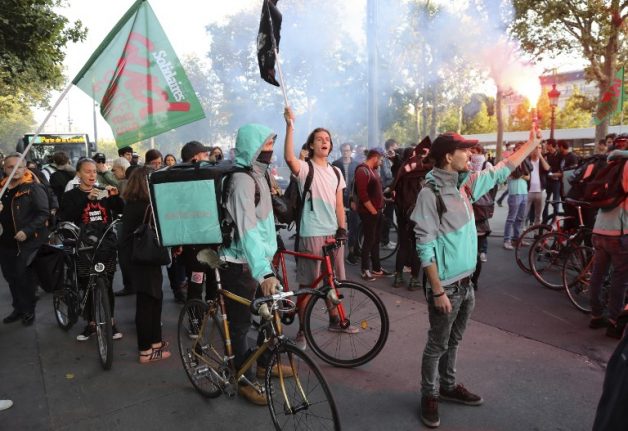 File photo: Deliveroo employees demonstrating in November 2017/AFP
The weeklong strike from Sunday — deliberately timed to coincide with the World Cup when many customers are dining in front of TV screens — will also include staff from platforms Foodora, Stuart and Glovo.
“It's urgent that we reverse the balance of power,” the delivery-workers' collective CLAP wrote on Twitter, noting that next week was set to be “one of the most profitable for the platforms”.
The collective called on customers to join the action by refusing to order food next week. Photo: AFP
The strikers are calling for standardised pay for a guaranteed minimum number of hours' work per cyclist, as well as bonuses for working evenings, weekends and when it is raining.
“For several months we have seen our pay decrease and the delivery distances go up,” CLAP said, with the amount of guaranteed work per cyclist becoming “more uncertain” due to a recruitment push.
The cyclists accused the government of helping to make permanent what it called “a system based on the precarity of its workers” through planned legislation.
An amendment to a bill backed by the employment minister would create a charter allowing such services to continue treating employees as freelancers rather than permanent staff with better rights.
Like other world capitals, Paris has seen a proliferation of food delivery bikes and mopeds zipping around the streets in recent years.
The Petit Robert dictionary added the word “uberisation” in 2017, following a wave of debate over precarious conditions for people working for new “gig economy” companies like the car-hailing giant Uber.