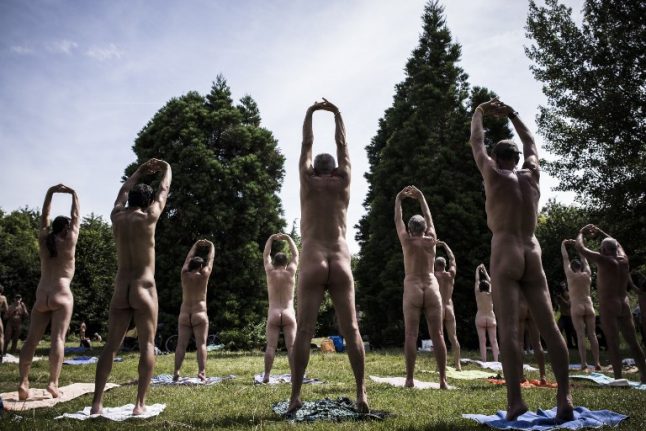 Photo: AFP
As an outsider, it can be difficult to understand naturism – after all it isn't exactly like taking up pottery, pilates or painting.
Nevertheless in France there are an estimated 2.6 million nudists in France, a country which is home to the most popular naturist resorts and beaches in the world.
Indeed the French Federation of Naturism reported an increase of 40 percent in memberships between 2014 and 2015 alone.
France also attracts more naked holidaymakers than any other country, some 3.5 million people in fact, each year. In all, there are 500 spots around the country where taking your clothes off is officially authorized, including 150 campsites and 120 beaches.
READ ALSO: The top ten places to get naked in France this summer But how do those keen to bare all end up with a desire to get naked in the first place?
Some discover their naked passion later in life.
Alain, 50, from the northern Paris suburb of Sannois, adopted the lifestyle around the age of 43. He was sold on it after having watched a program about naturist resorts.
Unfortunately for Alan, he couldn’t convince his partner at the time, so he says he goes on naturist holidays alone.
“We’re 7 and a half billion people on this earth, we’re all made in the same way. To me nudity is simplicity, it’s liberty,” he said.
READ ALSO: French nudists bare all for trips to theme park and museums A family affair
But many thousands of new naturists in France are young parents and their children.
Sarah, 39, from the southern Paris suburb of Grigny practices naturism with her husband and children. She adopted the lifestyle long ago.
“I did it when I was little with my parents, and I then initiated my husband and my kids. It often passes from generation to generation, and we have friends just like us,” she told The Local.
“The most difficult part is convincing the husband, the kids start early so they take it up quickly. Men are often more modest than women, so it happened over time, but with the presence of friends, he quickly forgot his fears,” she said. Yves Leclerc, the vice-president of French Federation of Naturism, said that young French couples with children are attracted to naturist camping holidays “because there is a far greater sense of family and conviviality in these spaces.”

“The spirit of these campsites is far more about tranquility, security and conviviality,” he said, adding that the camps were an excellent place for children to play and learn.

READ ALSO: Food in the nude – Behind the scenes at Paris's first naked restaurant Many nudists consider naturism a means of connecting with nature and respecting the environment.

Speaking with La Libération newspaper, Julie Leclerc from the FNN said that naturists often prefer to eat organic food, care for sustainable development, and push for the preservation of the planet.

Being naked is the best means of being closer to nature and is considered a prime state for reflection, she added.

Anne Sol, who runs the Fiscalou campsite in the Midi-Pyrénées in south western France, told The Local that this interest in healthy living is central to the beliefs of this new wave of naturists.

And what about the growing number of young people opting for a naked lifestyle?
Meven, aged 20, from Brittany has been a naturist for little under a year.
“I wanted to delve into naturism because at this age, we see things differently,” she said. “I thought why cover up my body when I was born naked. I also accept my body the way it is so it doesn’t bother me to show it, and anyway we’re all made the same so why be modest?”
'The key is original events'
For Cedric, 27, from Paris, the idea of adopting a more stripped down lifestyle began at the age of 17 after a chat with friends one day at the beach while on holiday.
“I was curious about it,” he said. “And after having spent two to three days living a rather unique experience, I never stopped.”
Cedric is now the vice president of the Paris Naturists Association.
“The idea is to trivialize nudity, it shouldn't be that big of a deal, especially in Paris, people shouldn’t have to go far out of town to be able to practice,” he told The Local. “We’re hosting more and more original events, and in the past year, we’ve seen a big increase in young members.”
The association numbers 60 students among its members, and the secret, he says, in drawing the youth and bringing them to experiment in naturism is by hosting these one-off events that appeal to a younger crowd who find it “cool” to try out, even if just that one time.
“Our naturist visit to the Palais de Tokyo museum was rather original and we have a lot more activities planned,” he said.
The association also hosted a naturist clubbing night in the 10th district of Paris (see pic below) and a picnic in the Bois de Vincennes, for which some 3,000 people showed interest on the group's Facebook page. Clothes is a breach of freedom

Jacques Freeman, the head of communication at APNEL (Association for the Promotion of Naturism in Liberty) believes that young people are gaining confidence in speaking out against authority on all levels and this is a reason for the increase in naturists.

“Nudity is synonymous with freedom,” he told The Local previously.

“We're currently at a time where there are many questions being asked about the future, work and problems surrounding integration into society are being challenged by young people.”

He said that imposing people to wear clothes is considered by some to be a breach of their freedom.

His association seeks to eliminate the preconception that nudity equates to sexual exhibitionism.

Many females choose to become naturists in order to make a feminist statement, which is that their body is not something that exists in a sexualised way, for male scrutiny. In being naked they are empowered, he explained.

“I used to relate nudity to sexuality before, but not anymore,” she told AFP. “Being nude is just about feeling good with other people equally, without the shackles of clothing.
“A naked body is neutral,” she said, adding that she enjoyed the fact that there were “no prying eyes”.
And French tourism chiefs are keen to pull in more potential naturists and have run several campaigns urging anyone curious to come to France to give it a try.
Anne Pedersen, the tourism campaign's spokeswoman said: “People are seeing a new side of France – everyone knows about the wine, the gastronomy, the winter skiing, the city breaks, but this is a bit more unusual.”
READ ALSO: Au naturel – The golden rules for taking your clothes off in France