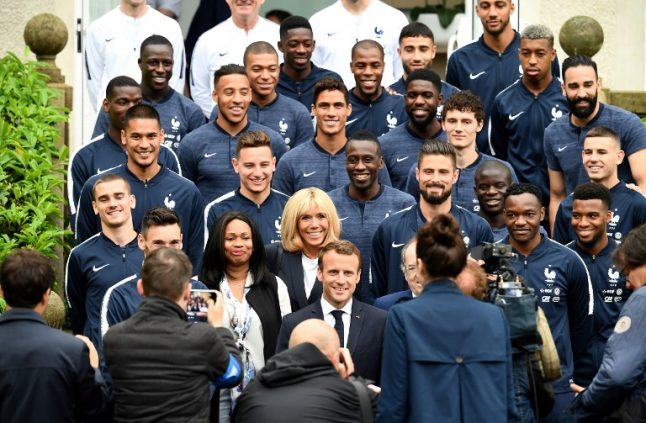 Macron and his wife pose with the French team before the players headed to Russia. Photo: AFP

The president was due to unveil the plan to help the 8.7 million French who live below the poverty line next Tuesday in a major announcement that was likely to dominate the headlines.

But then France beat Argentina in the World Cup in Russia and may, if they beat Uruguay on Friday, make it through to the quarter final which is due to be played next Tuesday.

Macron said in May that he would travel to Russia to attend the match if the national team made it that far.

His Health Minister, Agnès Buzyn, who had a part in drawing up the anti-poverty plan, said there would be uncertainty about the president’s availability to present the plan, with some officials saying it could be postponed until September.

“Poverty doesn’t wait,” was the tart reaction from the Secours Catholique, one of the country’s biggest charities.

“Macron’s cynicism is seen again with the postponement of the report on poverty,” declared Lydia Guirous, the spokeswoman of the right-wing Republicans party in a tweet.

“The poor after the World Cup, what a communications disaster,” the boss of the Force Ouvrière union told France Inter radio, adding that he hoped there was a better reason.

The government quickly sought to change the narrative, with one unnamed official telling AFP that “football is of course not the only reason for the postponement.”

“But of course one doesn't make an announcement of that importance on a football day,” the official added.

The government had been hoping that a high profile unveiling of the poverty plan would help dispel the accusations that Macron is “president of the rich” and little interested in ordinary folk, especially those in small towns and in the country.