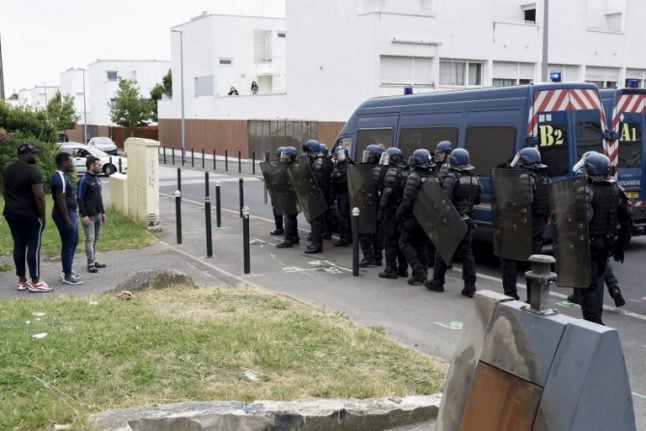 Riot police in position ahead of last night's riots in in Nantes suburbs. Photo: AFP

Police arrested 11 people, four of them minors, during the night, most of them in the Breil area of the city, where the unrest began on Tuesday night after news spread that an officer had shot dead a 22-year-old man after stopping his car.

Riot police battled pockets of masked rioters throughout the night until the early hours of Thursday in Breil and several other areas of Nantes.

As day broke burnt-out cars and splintered glass from smashed windows littered the streets. A community centre which housed a public library was among the public buildings rioters set on fire. Around forty cars were also torched, while a pharmacy and other shops were also set ablaze.

The young men and teeenagers taking part in the unrest failed to heed the call by the dead man’s family for calm in the Nantes suburbs, where the current trouble highlights simmering tensions that are prevalent in deprived areas of many French cities.

Prime Minister Edouard Philippe travelled to Nantes on Thursday to meet the city’s mayor and take stock of the situation after two consecutive nights of rioting.

He condemned the riots and promised “the fullest transparency” about the circumstance's of the man's death.
Interior Minister Gerard Collomb said Wednesday “all the necessary resources” were being deployed to calm the situation in the restive Nantes suburbs.
The unrest began on Tuesday when the young man, named in the media only as Aboubakar F., reportedly tried to flee after being stopped by police in Breil, a socially mixed district home to a large housing estate with a history of gang violence.

Police said he had reversed into a police officer while trying to flee, which prompted an officer to open fire and shoot him in the neck. The victim was hit in the carotid artery and died in hospital two hours later.

But some local residents have angrily contested the police account of the killing.

A woman who filmed the incident, who wished to remain anonymous, said “there were no police behind the car, he didn't hit anyone. There was only the one gunshot.”

Another person who said they witnessed the arrest said the young man had handed over his ID documents.

A national watchdog which investigates claims of police wrongdoing is investigating to clarify “the facts and determine in what circumstances the policeman used his weapon,” Nantes prosecutor Pierre Sennes said.

The driver, who was from a Paris suburb, had been wanted by police in Creteil, near Paris, for robbery and other offences, Sennes said.

French police have a long history of strained relations with youths in poor, immigrant-heavy suburbs – not least since the death of two teenagers, electrocuted while hiding from officers, sparked nationwide riots in 2005.