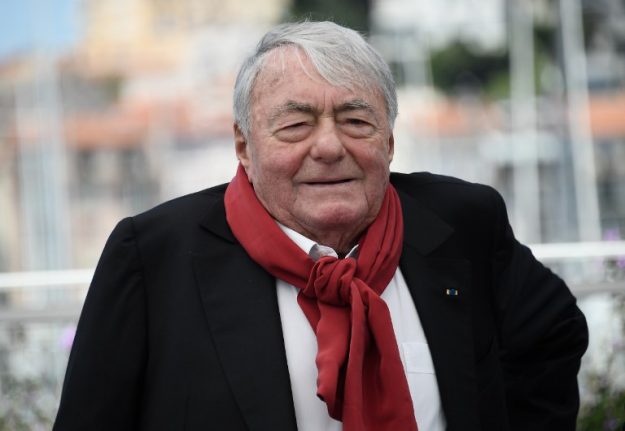 Lanzmann at the Cannes film festival in 2017. Photo: AFP
“Claude Lanzmann died at his home. He had been very, very weak for several days,” a spokeswoman for publishing house Gallimard told AFP.
His death was also confirmed by a press officer for his final film, “The Four Sisters”, which was released in France just this week.
Lanzmann had never stopped working, regularly presenting films which often took their inspiration from chapters of his own life.
Last year for example, he presented at the Cannes film festival “Napalm”, about his brief but intense romance with a North Korean nurse in 1958. Photo: AFP
But it was the 1985 release of “Shoah” (the Hebrew word for “calamity” often used for the Holocaust), considered by many the most haunting film made about the murder of six million Jews during World War II, which propelled him to global acclaim.
The nine-and-a-half-hour work consists largely of interviews with survivors and witnesses of Nazi death camps in Poland, alongside chilling images of where the horrors occurred.
“If I am unstoppable it's because of the truth, which I believe in profoundly,” he said in an interview with AFP last year.
“When I look at what I did in my life, I believe that I came to represent the truth, I never played with it.”
Romance with Beauvoir
Lanzmann was born on November 27, 1925, to Jewish parents in the Paris suburb of Bois-Colombes.
He joined the French resistance during World War II and also taught at the then-newly founded Free University in Berlin after World War II.
He played a part in the vibrant postwar intellectual scene in France, becoming secretary to the existentialist philosopher Jean-Paul Sartre.
He was 26 when he met Sartre's partner, the feminist icon Simone de Beauvoir, then 44.