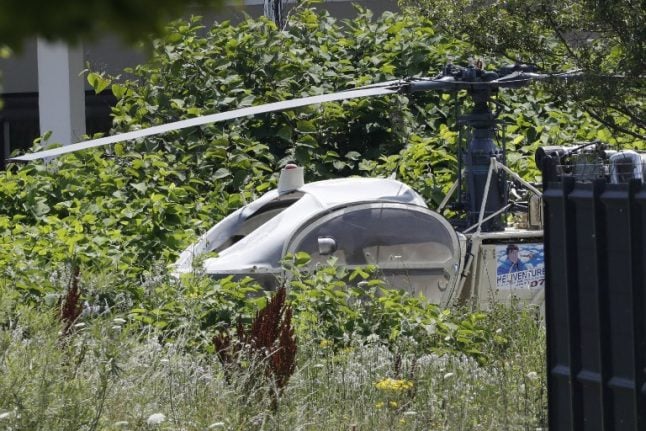 French helicopter Alouette II abandoned by French armed robber Redoine Faid after his escape from prison in Reau. Photo: AFP
Redoine Faid, 46, broke out of the prison near Paris with the help of two accomplices on Sunday who used smoke bombs and angle grinders to make their way into the facility's visiting room where Faid was talking to a brother.
The men quickly made a spectacular escape by helicopter in an operation which lasted just 10 minutes.
The pilot of that helicopter, Stéphane Buy told his story on French radio on Wednesday.
Buy described as just a “normal day”, saying his two 'students' “aged around 50 and a little over 20-years-old” respectively arrived as expected at 9.30 am.
READ ALSO:

It was his second lesson with them, with Buy believing it was “a father who wanted to make his son happy” with flight lessons.
“We talked about what we would do, fly over and see,” he said.
But as he approached his R44 Robinson helicopter, which he planned to take the pair out in, the two men told him they would prefer to fly the Alouette II, which was slightly larger.
“I told them that I could not take this helicopter, it was not ready, it was borrowed and it didn't have enough fuel,” he said.

Photo: Screengrab LCI
Suddenly, Buy said, everything changed.
“They were aggressive and forced me to take the other helicopter,” he said.
“They told me that my family was in danger,” he said. “I was dealing with some nice people who had become very mean and who were threatening me. I did what they said.”
Once the helicopter had taken off towards the south east, the men asked if the machine could land so that they could have a pee in a field, Buy said. Police investigating the site where French robber Redoine Faid abandoned a French Alouette II helicopter after his escape from prison. Photo AFP
At that point, they pointed weapons at Buy and said that we were going to get their friend in Réau prison.
The pilot said he went along with it because they had threatened his family and he felt like he didn't have a choice.
After taking off, Buy was then forced to stop the helicopter for a second time on waste ground.
“They ask me to cut the engine and put my head in my hands so that I couldn't see what was going on outside,” Buy said, adding that he guessed they were loading bags into the helicopter.
When they tried to take off, Buy thought he was in trouble because despite his efforts the helicopter would not start up again.
“They accepted that I needed to sort out the problem and it was at this point that I saw that they had completely covered their faces,” he said. But when the repairs took too long the pilot was dealt a blow to the head.
“I fell to the ground and was unconscious for a few seconds.”
Once he had come to, he tried again and the turbine started. Photo: AFP
The hostage was instructed to fly very low and he said at one point, the men seemed to be a bit lost until the red walls of Réau prison came into view.
“One man stayed [in the helicopter] threatening me,” said Buy, adding that he was asked me to take off again but remain hovering a few inches from the ground.
Buy said that at this point he was worried about fuel levels but said that extreme concentration had replaced his fear.
Once the high profile escapee Redoine Faïd joined them, Buy was instructed to go to Lognes in the east of Paris, then they went on to Roissy in the northeastern suburbs of Paris.
The helicopter and Buy were later discovered at Gonesse, also in the northeastern suburbs of the French capital.
All during the flight, Faïd was silent, said Buy, adding that he learned who the escapee was “after the fact”.
A European arrest warrant has been issued for Faid and a manhunt has been launched by police in France.