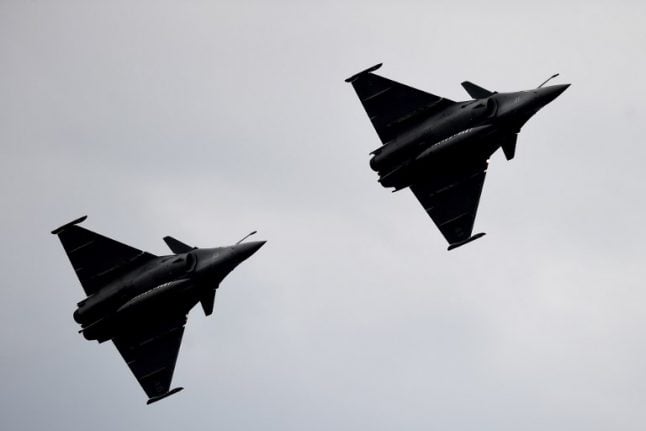 In its annual report to parliament, the ministry said the value of exports dropped to 6.9 billion euros ($8 billion) from 14 billion euros the previous year and the record 17 billion euros booked in 2015.
Those two years saw the first big export orders for Rafale jets made by Dassault Aviation — to Egypt, Qatar and India — following a string of failed efforts to sell the planes outside France.
But France, the world's third-biggest arms exporter after the US and Russia, will book an additional 12 Rafale sales to Qatar this year.
“The results from 2017, with 6.9 billion euros, is in line with the average from years before the Rafale contracts,” the ministry said.
It added that helicopters and missiles made up nearly half of last year's foreign orders.
Orders from Middle East clients rose to 3.9 billion euros from 1.9 billion in 2016, despite an economic slowdown stemming from lower oil prices “which delayed some acquisition projects,” the ministry said.
NGOs and other critics have assailed France for supplying weapons to Mideast governments, in particular Saudi Arabia and the United Arab Emirates over their support for pro-government forces in Yemen fighting Huthi rebels.
Around 10,000 Yemeni citizens have died in the fighting, and some groups accuse the Saudi-led coalition of bombing schools, hospitals and other civilian targets.
A March poll found 74 percent of French people against selling weapons to Saudi Arabia and 71 percent were against supplying to the United Arab Emirates.
Humanitarian groups say Paris is violating the Arms Trade Treaty it ratified in 2014, which requires exporters to ensure their weapons will not be used for human rights abuses.
A group of four NGOs also denounced on Monday the surge in French arms exports to Egypt, including surveillance equipment it says President Abdel Fattah al-Sisi's government is using to “eradicate all forms of dissent and citizen action.”
Their statement came as Egypt's Defence Minister Mohamed Zaki made an official visit to France, just a week after French Foreign Minister Jean-Yves le Drian met Sisi in Cairo last week.
But the defence ministry rejected such claims in its annual report.
“These exports are carried out within a strict legal framework. They scrupulously respect to the letter the treaties and international commitments” signed by France, it said.
The ministry also rejected 50 export contracts, mainly to governments in Central and Southern Asia.
Defence chief Florence Parly will present the report during an audition Wednesday with lawmakers, some of whom are pushing for more parliamentary control on arms sales.