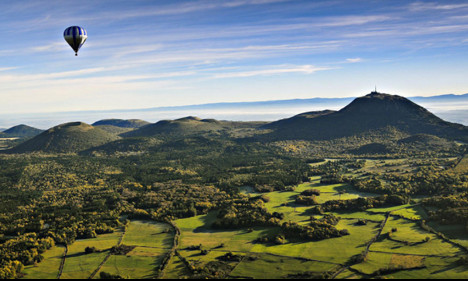 The Auvergne region of central France was actually voted one of the top must-visit destinations in the world by Lonely Planet magazine back in 2016, but it still remains much less well known than areas like the Côte d’Azur or the Alps.

But for our money it’s a must see. Here’s why:

Don’t panic – none of Auvergne’s 450 volcanoes have erupted for well over 6,000 years, but they have left their mark all over the region, from the distinctive stone rock of local architecture to Vulcania, an educational volcano theme park located near the Chaîne des Puys mountains.

Visitors can hike, bike or take the train to the top of the tallest peak, the Puy de Dôme (‘puy’ means volcano in the local dialect), and survey the surrounding area. You can also visit Clairvic spring, the source of Volvic mineral water.

READ ALSO Readers recommend: the hidden gems to explore in France this summer

In the Auvergne you don’t have to be satisfied with simply admiring the beautiful landscape, but can also help to protect it if you opt to stay in one of Nattitude’s gites, hotels or campsites, or in a CosyCamp site.

Both companies offer alternative accommodation options with a focus on saving energy, using local produce and promoting the fitness and wellbeing of their guests.

The Auvergne is home to over 500 castles, each one a reminder of a moment in France’s history from the ancient Gauls onwards.

The ruined medieval fortress of Bourbon-L’Archambault is one of the oldest feudal ruins in Europe, while the ivy-covered Château de Sédaiges in Marmanhac is still inhabited by the descendents of the family who built the castle in the 1400s. For true castle enthusiasts, staying overnight is possible in this and several of the region’s other castles, such as the 15th century Château de Riau which has its own moat and dungeon.

Despite the rural landscape and untouched feel to much of the Auvergne, its cities are also worth a visit, and five towns in the Auvergne have been labelled official Villes d’Art et d’Histoire (Towns of Art and History).

In Moulins, the hometown of Gabrielle Chanel, you can visit the Grand Café where she used to sing, and the mountaintop city of Clermont-Ferrand offers visitors views across the Chaîne des Puys mountain range and varied cultural offerings such as its International Short Film Festival.

If you’re visiting during the rugby season, Clermont-Ferrand is home to one of France’s best teams, Clermont Auvergne, which boasts world class players, a good selection of half-time snacks and a particularly good fans’ band.

As you’d expect from the home of the Michelin brothers, Auvergne has a reputation for hearty, delicious cuisine.

The region is responsible for producing a quarter of France’s AOP cheeses; the cows’ mountain flower diet is said to improve their flavour.

Other local specialities include stuffed cabbage, cured meats, and aligot, a local dish made of cheese, mashed potato and garlic, which was traditionally served to pilgrims on their way to Spanish shrines.

Vichy is the most famous of the region’s spa towns; it was a favourite of Napoleon III and the water is said to help cure digestive problems and migraines.

But there are plenty of lesser known gems in the Auvergne for those looking for health treatments and relaxation. Why not visit the Roman baths of Néris-les-Bains, or Chaudes-Aigues, which boasts Europe’s hottest springs and a spa centre with waterfalls and a musical bath.

What it lacks in luxury chalets and trendy après-ski spots, the Auvergne makes up for in reasonable costs, minimal queuing and stunning settings for a variety of snow sports.

Try alpine skiing on a volcano, fishing expeditions on a frozen lake, or more niche sports like luge or dog sledding.

The Auvergne has plenty of medieval ruins and historic buildings in the Romanesque style; five of its Romanesque churches are labelled ‘Major Churches’ due to their architectural style.

But a conceptual art project, Horizons, has added a modern twist to the Auvergne landscape for the past few years. Sculptures and other artistic creations have been put up in the region’s natural spaces, offering surprises for lovers of nature and art.

The best way to explore the varied terrain of the Auvergne and to take in its magnificent views is on foot. It’s possible to find demanding trails for experienced hikers as well as easy routes – labelled with yellow butterfly markers – suitable for novices, children and even pushchairs.

Thanks to its volcanic roots, the Auvergne is home to more than 100 spring and mineral waters, the most famous being Volvic.

It takes more than three years for the rainfall in the area to permeate the lava-coated valleys around the source, supposedly leading to pure, high quality water.

And for those who prefer something stronger, the wines of Saint-Pourçain and Côtes d’Auvergne have both been awarded AOC status, and were enjoyed by French kings and the popes in Avignon.

The only drawback is that it’s not particularly easy to access. The nearest airport is Lyon but you can also get a direct train from Paris to Clermont-Ferrand, which takes about three and a half hours.

Here’s a map of where the actual Auvergne is: The Communist leader Fabien Roussel has called on town halls to close on Tuesday in ‘solidarity’ with the strikes. The decision is down to each individual commune, but in Paris the mayor Anne Hidalgo has announced that the mairie will close for the day, so you won’t be able to keep administrative appointments, although city services like bin collection will run as normal.