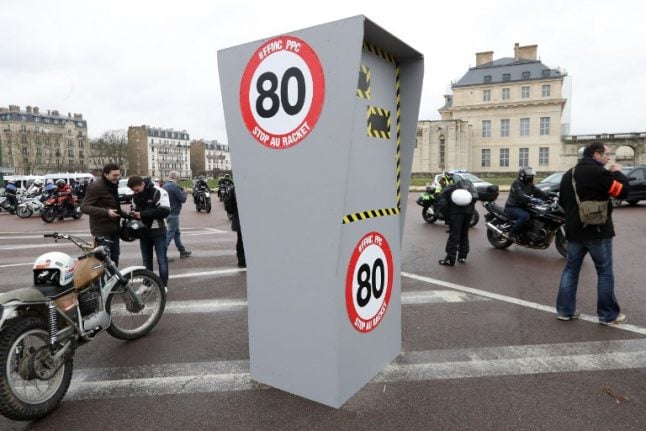 Photo: AFP
What's happening?
Essentially from July 1st the speed limit on two lane highways without a central reservation has been cut from 90km/h to 80km/h.
Why?
The move is part of the French government's drive to improve road safety in France which has a bad record when it comes to fatal accidents, especially on the country's secondary road network.
A report released in April by France's observatory of road safety ONISR, looked at road deaths between 2012 and 2016 on the country's two-lane roads outside of urban areas, in other words in the countryside.
Out of 9,579 deaths on the roads 762 were on routes nationales, so the main roads after motorways, 8,221 were on route departementales, so secondary roads, and 596 were on smaller countryside roads.
Prime Minister Edouard Philippe believes the move will save 300 to 400 lives a year. Critics of the cut in the speed limit don't agree.
In Maps: A look at the most dangerous roads in your part of France Which roads will be affected?
The reduced speed limit (from 90km/h to 80km/h) applies to 400,000 km of two-lane highways (roads with cars heading in both directions) across the country – so 40 percent f the overall road network.
In detail that means that on July 1st, the speed limit on roads with two single lanes of cars travelling in opposite directions WITHOUT a central reservation was cut to 80km/h.
However the new speed limit will not be applied to four-lane roads, where the speed limit remains 90 km/h, due to the fact that in this situation cars can overtake one another without entering a lane of vehicles travelling in the opposite direction.
When it comes to three-lane roads (with two lanes going in one direction and a third going the other), the speed limit will remain 90 km/h in the direction where there are two lanes. However motorists travelling on the one lane side have to reduced their speed to 80 km/h.
READ ALSO: Where in France are the countryside roads the most dangerous? Photo: AFP
Motorists will now notice that on some roads the speed limit is different at different points, depending on how the lanes are organised.
And on top of that some areas of the country are more affected by the changes than others.
For example, across the whole of the greater Paris region of Ile-de-France, less than 7,500 km of roads are going to be affected by the new speed limit.
While in the Dordogne, which is 30 times less populated than the Paris region, more than 10,000 km of roads will be hit by the change.
Who will be affected?
From July 1st all vehicles and drivers are expected to adhere to the 80km/h speed limit whereas at the moment only heavy trucks and new drivers have to drive that slowly on these sections of roads.
What happens to people caught speeding?
A motorist caught violating the speed limit will be subject to a fine and a point will be docked from their license.
And drivers have been warned that there will be no soft introduction to the change so assume that from July 1st, if you are caught speeding you will be penalised. Photo: AFP
According to figures from traffic navigation company TomTom, it will be drivers in the Seine-et-Marne in the greater Paris region of Ile-de-France where drivers are most likely to be caught, with 47 fixed speed cameras located on sections soon to be limited to 80 km/h.
That figure compares to just 26 in the Dordogne.
“The possible rise in the amount of fines collected by the state related to the reduction of the speed to 80 km/h, will be allocated to a road safety investment fund,” said the Interior Ministry.
Will road signs and speed cameras be updated in time?
The government has promised that all speed cameras located on the stretches of road where the speed limit is changing will be updated.
This means adjusting 1,800 speed cameras — more than half of the cameras currently installed in France, according to AFP.
However the government has admitted that not all the new 80km/h road signs will be in place in time for the changeover.
“Within a fortnight, the departments will be able to choose to change the 90km/h panels, remove them or hide them,” said Emmanuel Barbe the government's road safety tsar.
However there are some fears that some departmental authorities opposed to the change will see this as an opportunity not to update the signs so, when in doubt, the government has advised drivers to assume that the speed limit is 80km/h. Photo: AFP
How much will it cost?
Well it certainly isn't going to be cheap if a statement from France's Interior Ministry on Sunday is anything to go by.
According to the government, 11,000 road signs will need to be changed across the country — a downgrade on the initial figure of 20,000 — and this will generate a cost of between €6 million and €12 million.
“The average price to change a panel is €200,” Julien Vick, a representative for the union of roadside equipment, the SER told AFP.
How has the change been received?
It's fair to say that the new measure is a controversial one.
In fact, it's fair to say it's downright unpopular among motorists anyway.
According to a poll carried out by insurance firm AXA in April, three quarters of French motorists are opposed to the change in speed limit.
Among the reasons for being opposed to the reduction in speed limit, opponents have cited the fact that as the 80 km/h speed limit is extended to all drivers rather than just those driving heavy vehicles, it will be harder and more dangerous for cars to overtake larger vehicles on the road.
And motorists group 40 millions d'automobilistes has been against the move from the beginning.
“It's a catastrophe and completely stupid,” head of the group Pierre Chasseray told The Local.
“They said at first that this was just an experiment but it clearly isn't because it's being rolled out across the country all at the same time,” he said.
“We will fight against the change because there is zero proof that it will save lives and in fact, in other countries like Denmark they have seen that increasing the speed limit can actually reduce road accidents,” he said, referring to a study where the speed limit was increased from 80km/h to 90km/ h on a section of the Denmark's secondary network which resulted in a 13 percent decrease in mortality over two years.

“This measure does not tackle the cause of road deaths in France which are not related to speed and impact but to other reasons such as elderly drivers and drunk drivers,” he added.
Nevertheless, it probably won't come as much of a surprise that despite the widespread outrage, road safety groups fully back the move.
How is the government promoting the change?
With three quarters of drivers opposed to the change, the French government has launched a four-part communication plan to promote the new speed limit.
On Sunday June 24th, a road safety video called “13 metres” — after the braking distance gained by switching the speed limit from 90km/h to 80km/h — is set to broadcast on French television screens. The film will also be available on internet platforms, including YouTube and Facebook and will be shown in cinemas.
On top of that the police will be distributing one million copies of a road safety leaflet with the message “Drive less quickly or more of us die”. It also states that the new speed limit has the potential to save 350-400 lives every year.
And the communications drive will step up a gear on July 1st, with gendarmes set to promote the change in the local French press and Prime Minister Edouard Philippe, who is behind the change, travelling around the country to give interviews to local media outlets. Photo: AFP
What effect will it have on the French economy?
According to the government's road safety body, the new speed limit will give motorists a small economic boost while only slowing them down by an insignificant amount.
“It will take 45 seconds more for a journey of 10 kilometers and two minutes for 25 kilometers,” the road safety organisation said. “But this will allow drivers to save €120 per year of fuel.”
But not everyone is buying it.
Jean Pouliot, an expert on French roads, assessed the economic impact of reducing speed limits on different kinds of roads in France and he believes that reducing speed could lead to a significant drop in the country's gross domestic product (GDP).
“Contrary to an intuitive idea, reducing road and highway speeds does not statistically lead to increased travel times, but to reducing the average distance traveled per trip, the so-called range of travel,” Pierre-Olivier Cavey, director of studies and campaigns of the League of defense of drivers who supports Pouliot's research told the French press.
Cavey argues that this will lead to “a loss of economic efficiency” as people stop travelling as far for work and to visit supermarkets, for example and could jeopardize businesses. Photo: AFP
Updating your GPS
Once the new speed limit is introduced, you'll probably want to make sure the GPS system you use has been updated with the change.
For people with the most recent models of cars with an in-built GPS system, you probably won't have to change anything. It's likely your vehicle is equipped with a system for recognizing speed limit signs and will display the correct speed limit on the screen in your car.
However if there is no sign in place, it might be necessary to update your GPS. Photo: AFP
And if you drive an older vehicle with an in-built GPS you'll have to carry out an update. This can be done by the company who sold you your car or by ordering a DVD with the updates — just make sure the seller is legitimate.
Newer models may have a connected GPS meaning the update can be done remotely or via a download from a computer.
If you use a GPS box it will probably display the right speed limit. However it's probably worth checking before July 1st.
Meanwhile on GPS apps like Google Maps and Apple Plans the update will be done automatically. You just have to be vigilant and report any errors if you come across.
READ ALSO: