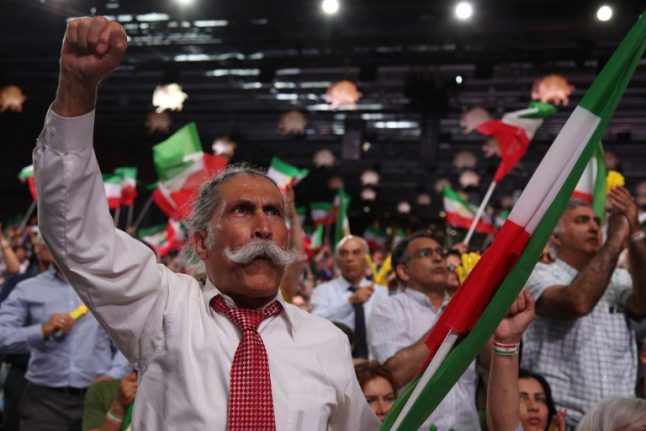 People attend the "Free Iran 2018 - the Alternative" event on June 30, 2018 in Villepinte, north of Paris during the Iranian resistance national council (CNRI) annual meeting. Photo: AFP
Amir S., 38, and Nasimeh N., 33, both Belgian nationals, “are suspected of having attempted to carry out a bomb attack” on Saturday in the Paris suburb of Villepinte, during a conference organised by the People's Mujahedin of Iran, a statement from the Belgian federal prosecutor said.
The couple, described by prosecutors as being “of Iranian origin”, were carrying 500 grams (about a pound) of the volatile explosive TATP along with a detonation device when an elite police squad stopped them in a residential district of Brussels.
Belgian prosecutors said an alleged accomplice was under arrest in France, while two others were released after questioning by French police.
Three people were also being held in France on Monday, a legal source told AFP.
“The investigations aim to determine the relations they might have with the suspects arrested in Belgium” on Monday.
The Belgian statement said that an Iranian diplomat at the Austrian embassy in Vienna, a contact of the couple, was also arrested in Germany.
Police carried out five raids across Belgium on Saturday linked to the affair, authorities said, though they refused to detail any results of the operation.
Iranian opposition group the National Council of Resistance of Iran accused Tehran of being behind the alleged plot.
“The terrorists from the Mullahs' regime in Belgium assisted by its terrorist-diplomats planned this attack,” said a statement sent to AFP.
The developments came on the day Iranian President Hassan Rouhani arrived to Switzerland for a trip Tehran said was of “crucial importance” for cooperation between the Islamic Republic and Europe after the US withdrawal from the Iranian nuclear agreement.
President Rouhani is also due to visit Austria, the country holding the six-monthly presidency of the EU.
At the rally, Trump allies Newt Gingrich and Rudy Giuliani urged regime change in Iran, saying the prospect was closer than ever after the Islamic Republic was hit by a wave of strikes and protests.
Former House speaker Gingrich and ex-New York mayor and lawyer Giuliani also told opposition supporters that Trump needed to turn up the heat on European countries still seeking to do business with Tehran despite reimposed US sanctions.
The Belgian statement said about 25,000 people attended the rally in France.
The People's Mojahedin (MEK), formed in the 1960s to overthrow the shah of Iran, fought the rise of the mullahs in Tehran following the 1979 Islamic revolution.
It earned itself a listing as a “terrorist organisation” by the US State Department in 1997 and was only removed from terror watchlists by the European Union in 2008 and Washington in 2012.
Belgium has been on high alert since the smashing of a terror cell in the town of Verviers in January 2015 that was planning an attack on police.