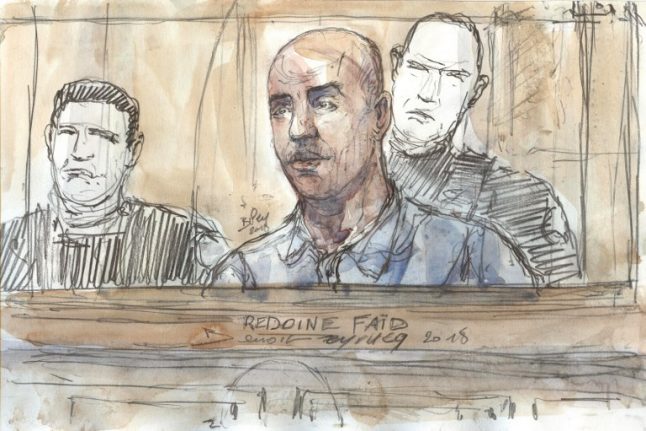 A court sketch shows French armed robber Redoine Faid during his trial at the Assise courthouse in Paris. Faid escaped from prison on a helicopter on Sunday. Photo: Benoit PEYRUCQ / AFP
Redoine Faid, 46, broke out of the prison in Reau in the city's southeastern suburbs within minutes, helped by a number of heavily-armed men, sources close to the case said.
The escape came after an appeals court sentenced him to 25 years for masterminding a May 2010 botched armed robbery, in which a policewoman was killed.
Faid fled on Sunday with three accomplices, according to the sources. The helicopter was later found in a northeastern suburb of the French capital, they said, adding that a police search has been launched across the entire Paris region.
It is the second time Faid has pulled off a spectacular jailbreak — in 2013, he blasted his way out of a prison in northern France using dynamite. He had been in prison since mid-2011 for breaking the terms of his parole over past convictions for bank robberies and brazen heists of cash-in-transit vehicles.
Armed with a pistol, he briefly took four guards hostage before escaping in a waiting getaway car. All the hostages were released unharmed.  Faid was eventually recaptured six weeks later at a hotel in an industrial area on the outskirts of Paris.
A woman working at the hotel told AFP at the time that Faid's accomplice had paid for the room in cash and that the two men had been there for several days.
Prior to the 2013 escape, Faid had been released from a previous stint of a decade behind bars after convincing parole officials that he regretted his criminal past and was determined to start afresh.
Faid, who grew up in tough immigrant suburbs outside Paris, has made several television appearances and co-authored two books about his delinquent youth and rise as a criminal in the Paris suburbs.
He said his life of crime was inspired by American films such as “Scarface” and “Heat”.
Url copied to clipboard!