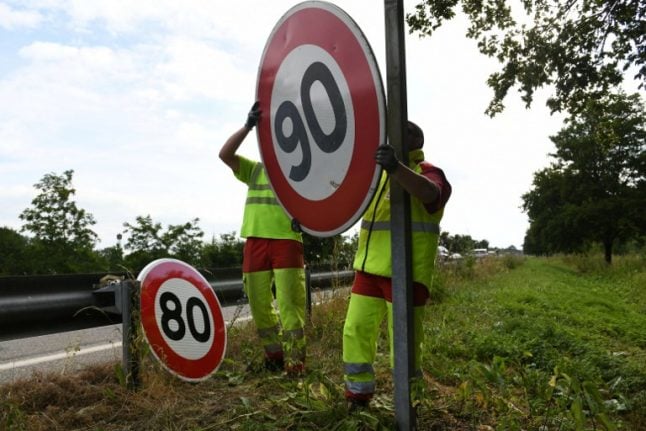 Workers replace a 90 Km/h speed limit sign with an 80 Km/h one on a road in Wittenheim in eastern France on Friday. Photo: SEBASTIEN BOZON / AFP
So when officials chose three stretches of the road back in 2015 to test lowering the speed limit to 80 kilometres (50 miles) per hour from 90, they surely knew they would rankle motorists.
Three years later some drivers have swung behind the change, but many others are still fuming.
“Yesterday I was going at 80 and it felt like I was going to fall asleep,” said Gerard Laguette, a local business owner in Croze-Hermitage, referring to the lower limit while driving on a 20-kilometre run to Valence in southeast France.
READ ALSO: How the upcoming speed limit change in France will affect you
Such complaints — and opinion polls showing 74 percent of respondents against the move — haven't stopped President Emmanuel Macron from pushing ahead with a countrywide rollout of the lower speed limits starting Sunday.
Officials say it's the only way to reverse an alarming rise in road deaths, which reached 3,684 last year. The 80 km/h limit on 400,000 kilometres of two-lane roads with no separating guardrail — often lined with trees in many parts of the country — aims to save 400 lives a year while also reducing auto emissions by 30 percent.
But critics deride the measure as “Paris snobbery” and the latest proof that Macron is the “president of the rich” with little regard for the concerns of ordinary voters.
The 40-year-old former investment banker has recently come under fire for blasting the “crazy amounts of dough” spent on social security, even while ordering pricey new presidential china and a private pool for his official vacation residence.
READ ALSO: French billionaire accuses Macron of not understanding 'little people'
Macron has also raised taxes on pensions and pushed through laws making it easier for firms to fire workers, while slashing taxes for high earners.
The lower speed limit is widely seen as an easy way to fill state coffers with more tickets.
The government “prefers tech-savvy city cyclists to country people driving diesels,” Vincent Descoeur, an opposition Republicans lawmaker, said in parliament this month.
'Political millstone'
The government launched TV and radio campaigns to try to quell motorists' anger, saying the new limits would add only a few minutes to most trips while cutting a driver's petrol costs by €120 ($140) a year. A 10-kilometre trip, for example, would take 45 seconds longer, or just two minutes more for 25 kilometres.
“The goal is not to piss people off,” Prime Minister Edouard Philippe said Friday, reiterating that he was ready “to live with being unpopular”.
He said a similar reduction on the Paris ring-road a few years ago led to an 18 percent drop in accidents. He also has promised that any spike in speeding fines will be allocated to caring for car crash victims.
Yet some local officials have vowed they won't put up the new signs, even though Philippe has promised to reimburse municipalities for the expected total cost of €6 to €12 million.
The president of the Hautes-Alpes department said he would make up the lost time for drivers by lifting the 70 km/h limit on some particularly twisty sections of roads in his mountainous region.
For Mathieu Flonneau, a French transport historian, even though the government has logic on its side, it risks appearing dismissive of the millions in rural areas who rely on their cars for work.
“If this measure is seen as leaving behind regions which are already on the margins of French society, it will be a sore point for many,” he told AFP.
Critics say that is exactly what's happening.
“The prime minister is trying to project an image of authority. It's a Parisian reform, with no regard for people who drive every day,” said Pierre Chasseray of the 40 Million Drivers advocacy group.
“This will be a political millstone they'll have to carry,” he said.
His group, along with the Federation of Angry Motorcyclists, are planning to snarl traffic in Paris on Saturday in a final mass protest against the measure.
By AFP's Joseph Schmid 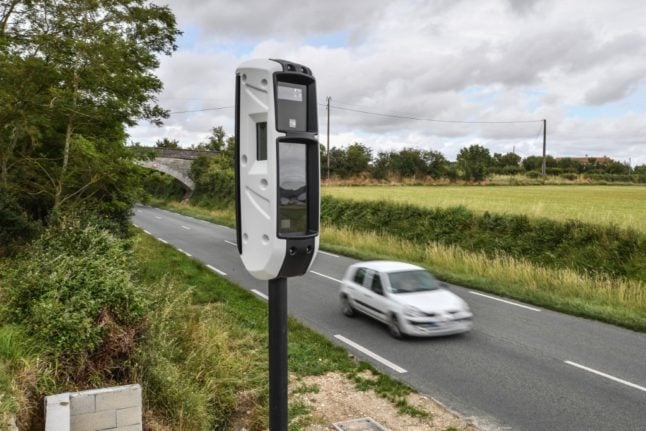 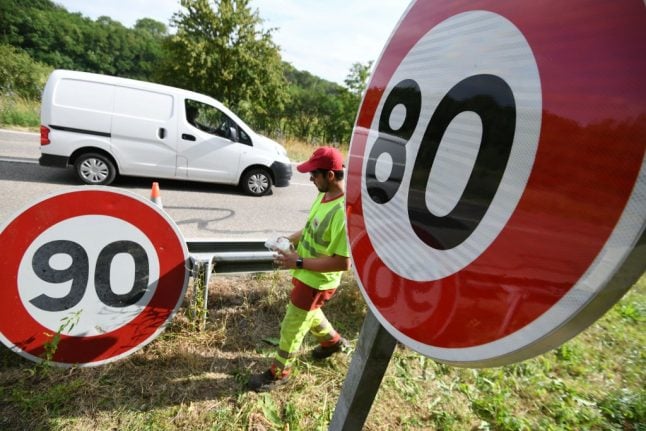 LIVING IN FRANCE
Does France’s return to the 90 km/h speed limit mean speeding fines will be cancelled?
Url copied to clipboard!