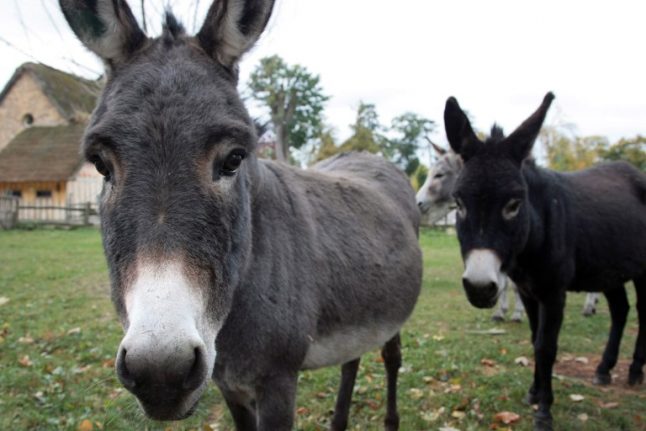 The hunter, a Swiss national named in local media as José R., was told by the court in the eastern town of Chambéry to pay the owner 23,500 euros in damages, and to give a further 6,000 euros to the local Savoie hunting federation.

He was also given a 750-euro fine, had his hunting licence revoked and was told he could not apply for a new one for at least three years, and had his weapon confiscated.

The damages and fines were imposed because the court ruled that he had not properly identified his target before shooting.

But it did not convict the hunter of cruelty towards animals, a charge which had been taken against him in a civil suit.

“I don’t understand how the judge can think that someone can shoot 11 times at four donkeys, at a distance of just a few dozen metres, by mistake,” Sandrine Lassiaille, the owner of the animals, told France Bleu radio.
Lassiaille runs a small company called Arpiane renting out donkeys for rides in the mountains. She had just one donkey left after the massacre and had to suspend her company’s operations.
The donkeys, named Fanfan, Ulule, Moustique and Mistral, were shot last September by the hunter near the mountain village of Arith.

Two died immediately while the others were critically injured and had to be put down. Lassiaille posted a video of them on her firm's Facebook page after they were killed last year.

Their deaths caused outrage in the Savoie region, with much attention focusing on the fact that the hunter had stopped shooting and then reloaded and started again.

In his defence he said that he believed that he was firing at deer because he was in a state of exhaustion after splitting up with his girlfriend the night before.