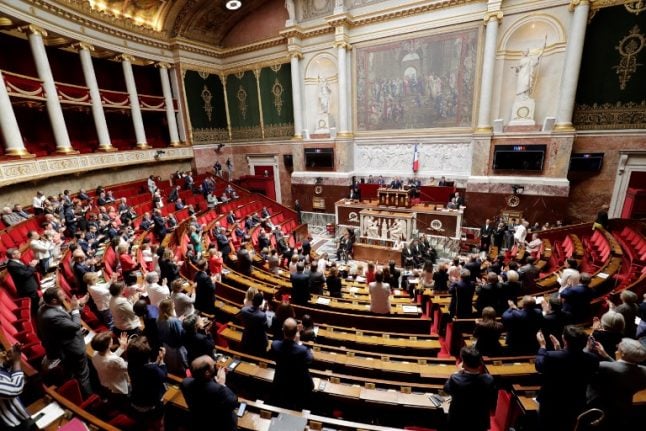 File photo: Assemblee Nationale/AFP
Arguing that there is no such thing as race, lawmakers from across the left-right divide agreed to strike the term from the first article of the constitution, which says all citizens are equal before the law “regardless of origin, race or religion”.
In the place of “race” they added “gender”, with the draft new article now reading that all citizens are equal, “regardless of gender, origin or religion”.
The term “race” was added to France's first post-war constitution in 1946 to send a message that the state would no longer tolerate the racist ideas propagated by the Nazis and the collaborationist wartime Vichy regime.
It was kept in a 1958 update of the constitution when France switched from a parliamentary to a presidential regime but in recent years politicians from French territories in the Caribbean and Indian Ocean had pushed for it to be scrapped.
The debate reflected the particular sensitivity in Germany, France and other parts of continental Europe over a term that is widely used in the US and Britain.
During his 2012 election campaign former president Francois Hollande, a Socialist, promised to relegate the word “race” to the history books.
“There are no different races,” he said, declaring the term “has no place in the Republic.
His rival Nicolas Sarkozy, who was outgoing president at the time, had poured scorn on the proposal to amend the constitution.
“If we delete the word racism does that mean that it will no longer exist? This is absurd!” Sarkozy protested.
Members of the cross-party commission revising the constitution also enshrined the principle of gender equality in the commission, a move seen by feminists as long overdue.
But the MPs baulked at a proposal to feminise the titles of various senior office-holders throughout the document.
For the time being, therefore, the president remains just that — with no “presidente” in sight.