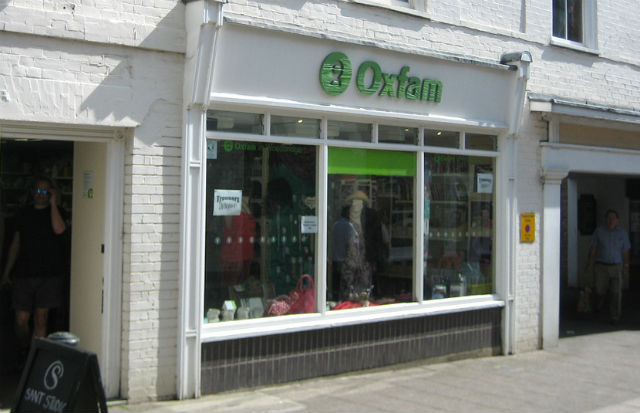 It’s perhaps no surprise that France, the country that gave the world haute couture, isn’t quite so taken by second-hand clothing as other nations.

Paris has its fair share of charity shops and artsy thrift boutiques, but high streets in other towns and cities across France lack the second-hand stores that are so common in the UK.

Has vintage clothes shopping just not taken off in France? Or do the French just not do charity in general? Is it a case of authorities not wanting town centre streets full of charity shops? The French tend to donate to other causes

So it’s not as if the French are not a generous bunch, they just prefer to donate to other causes such as medical research, child protection services and the fight against exclusion.

Under-35s, who represented 23 percent of donors in 2015, give priority to animal welfare.

The Oxfam craze never took off in France

In the 1940s a little-known charity by the name of Oxfam called on the British public to donate clothes and blankets to famine-struck Greece. The response was so generous that the newly formed NGO decided to sell the surplus garments as another way of raising funds, which led to their first charity shop opening in Oxford in 2018.

Since then, charity shops have become a mainstay of the British high street, with the Charity Retail Association estimating there are around 10,500 charity shops across the UK. They’ve blended in and are accepted in the commercial landscape.

Even Victoria Beckham is said to have once bought a cocktail dress at a charity shop in Notting Hill.

France on the other hand only has five Oxfam shops. There are other charity stores across the country but their absorption into the shopping mainstream hasn’t been as successful. Camilla Duchess of Cornwall likes hunting down a good bargain in France. Here she is at an Emmaus shop near Lyon. Photo: AFP

Stuck in the middle and in need of a makeover

We've seen that buying second hand clothes isn’t considered as much a means of charity in France as making financial donations to other causes is.

Nor is it a stretch to argue that French NGOs that do sell used goods might benefit from some smarter marketing tactics to get more mainstream buyers on board.

“Buying second-hand or 'vintage' products is very trendy in the UK, but the French are less into this type of shopping,” former Oxfam head Stéfanie Dufour told Le Figaro.

“Oxfam sets up shops like normal ones, well-stocked and well-equipped.”

If the French charity shop industry is to grow, it will need to do better in both fields, raising awareness about clothes donations as a worthy way of helping and finding ways for the second-hand stores to be accepted on the high street.

The French do donate their old clothes however, either by dropping them in a street container or waiting for collections to be made at apartments. Although it is never really clear where they end up.

The street containers are often raided by thieves who have somehow managed to have obtained a key. A 2016 study published in French daily Le Journal de Saone-et-Loire found that one in two people in France has bought second-hand clothes at least once in their lives, with 15 percent snapping up used clothing regularly.

Unfortunately for charity shops, French people are much more likely to look for a good vintage deal at a brocant, vide-grenier or marché-aux-puces, basically car boot sales or flea markets, of which there are thousands around the country. Emmaus, the most well-known charity retail chain in France with hundreds of stores across the country, has followed in Oxfam UK’s footsteps and launched an online store to keep up with current shopping trends.

But the same can’t be said of other big charity groups such as the French Red Cross.

There are also sites such as Percentil.fr that are encroaching on French charity shops’ territory. They also sell discarded garments but give users the chance to pick out clothes classified as “new” or “like new” for a fraction of the original price, with big brands like Zara, H&M, Levis and Desigual stealing the show. Not seen as cool

You get a sense that French charity shops could have done more to capitalize on the advent of thrift shopping in global hipster culture.

In fact, have a quick search online for coolest thrift shops in Paris and you’ll struggle to find any official charity shops making the lists apart from perhaps Emmaus.

Whether it’s the clothes they’re selling, their store locations or the fact that they don’t have a bearded lumberjack at the till, France’s magasins caritatifs don’t enjoy a particularly trendy reputation among enough young shoppers. Now’s the time to strike

Despite French people’s reputation for being chic dressers, a Eurostat study The Local had access to in January found spending on clothing among the population to be one of the lowest in Europe.

If les Français are indeed tightening their belts when it comes to fashion, it may be just the right time to promote charity shopping as a legitimate and guilt-free form of cheap retail therapy.

There’s a new law in the making that could help

It will soon be illegal for French shops to throw away unsold textiles and garments as part of the government’s ambitious plans to create a circular economy.

It was Emmaus who alerted the general public to this wastefulness by publishing photos showing how a Celio clothes shop in Rouen destroyed and discarded its unsold garments.

If the success of France’s food waste legislation is anything to go on (a ban on food waste by supermarkets catapulted the country to the top of the 2017 Food Sustainability Index), French charities stand to gain a lot from this legislation, when it most likely passes in 2019.