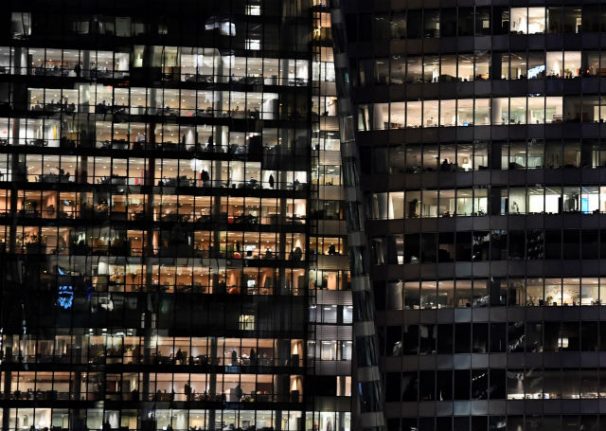 One complaint among foreign workers in France are the working hours that see office workers in France generally start later and finish later. Dolly Parton's famous lyric “Workin' 9 till 5” would have to be changed to “10 till 7” if it was to be remade in France.

It seems many English-speaking workers would rather start earlier, have a shorter lunch and get out of the office as soon as possible, rather than hang around until it's dark. Parents who have to leave their kids at school until after 6pm certainly find this an issue.

Megan Collins, who works at recruitment agency EuroLondon Appointments in France says its quite common for her to receive calls from clients at 7.30pm or even 8.30pm.

“In the UK people would generally rather start earlier, have 20 minutes for lunch and finish earlier in order to get home, but the French seem fairly happy to have a longer lunch and stay late. That's just how it is,” said Collins.

One French exec told The Local that French office workers and middle managers often work late simply because they don't want to be seen to go home too early as it might to look good.

So basically everyone is hanging around just for the sake of hanging around. The manager also suggested Parisians preferred to stay in the office rather than head home because they all lived in tiny apartments.

If you’re not one to allow any old person to invade your personal space, bear in mind kissing is common in the French workplace. “La bise” as it’s dubbed sees women greet female and male colleagues with a kiss on each cheek. And male colleagues will often do the same rather than shake hands.

Find it inappropriate? You’re not alone if so. It’s been called unhygienic, timewasting and chauvinistic. Others just see it as well, you know, culture.

If kissing colleagues isn’t your thing, we suggest setting the record straight from the get go, as the mayor of one French town did, emailing her fellow councilors “from now on I would prefer to shake hands, like men do”.

READ ALSO: Should the French ditch the 'hypocritical' greeting kisses at work? But you'll need to say “bonjour” (and perhaps nothing else)

We can never stress enough how important the word “bonjour” is in France. And you are going to need it a lot if you work in France. You'll need it from the moment you walk into the building to greet the concierge on reception, you'll need it in the lift on the way up to your office to be polite to the other occupants. And you'll also need “bonne journée” when you leave that lift.

You'll need it when you walk in the office and see colleagues in the morning and don't leave anyone out. And you might need to say “re-bonjour” if you see a colleague for the second time that day.

The French value the importance of basic politeness, and nowhere more so than the workplace.

But often you don't need to say anything more than that. Small talk is not common in France and you shouldn't feel the need to fill silences.

And unlike in other countries, in France there usually isn't much over-sharing between colleagues.

READ ALSO: Why this is the most important word in French French executives spend 16 years of their career in meetings, accounting for 40 percent of their working lives. These mind-boggling findings by work productivity company Perfony show just how ironic it is to schedule meetings to streamline work, only to end up not working because you’re constantly stuck in meetings.

Be prepared to be called into meetings at any time of the day, apart from before 9.30am and during lunchtime. It's not unheard of for managers to schedule meetings at 6.30pm.

And those meetings tend to last a while and everyone is expected to have their say and voice their opinions, so don't make plans for after they finish.

“Meetings in France are not just about one person speaking and everyone listening, as they can be in Anglo countries,” says Kara Ronin, who runs Executive Impressions in Lyon.

“The advantage of these long meetings is that whoever is taking part should get to have their say and air their views.” It’s not what you know…

Having friends in high places, avoir du piston or être pistonné in French, plays a key role in getting a job in France, according to 90 percent of people surveyed by L’Express newspaper.

Many consider it unfair but even greater numbers seem to want the whole “who you know over what you know” approach to stay. After all, one in two workers surveyed said they’ve got a job through connections in the past and 86 percent said they would recommend a family member over a colleague.

The trend is said to be particularly widespread among companies listed on the French stock exchange as well as in the film and media industry.

So if there’s a job or promotion you’re after in France, remember that rubbing shoulders with the right person might well help.

Don't be shocked if you see French colleagues, who you thought got on well, suddenly start shouting at each other in front of the whole office.

And don't read much into it. It's probably a disagreement from a meeting that has spilled over into the open rather than one of them has caught the other in bed with their partner.

And don't be surprised too if the two involved in the dispute go and have lunch together. The French are a bit more fiery but they are also a bit more honest and this is the same when it comes to working relationships.

Kara Ronin, who runs Executive Impressions in Lyon says: “The French are always very direct and say what needs to be said. Everyone has the right to their opinion and they are not afraid to offer it.

Bosses will expect workers to express their view and defend themselves. Everything is laid out on the table and the good thing about the French is they don’t take it personally. This isn’t an exclusively French office trait, but it does play a bigger role in daily working life than in many other countries. Because let’s be honest, in the land of Gauloises cigarettes and cafés, how could it not?

Now we’re not suggesting that you take up either vice if you haven’t done already, but do bear in mind that these nicotine and caffeine-infused pauses are often fundamental for forging office friendships and alliances.

A 2014 survey by France’s pubic opinion body IFOP found 84 percent of French workers considered these breaks “important” and “essential”, 81 percent said it encouraged the exchange of ideas, mutual help and problem solving and 67 percent argued it helped to release tensions and resolve conflicts.

So even if you consider social work breaks to be a waste of time or you don’t drink coffee or smoke, join your colleagues for a chat from time to time to not feel left out. Nobody’s stopping you from just ordering an orange juice.

Respecting the hierarchy is a big part of French working culture, especially in big companies. So if you don’t want to stand out for all the wrong reasons, be prepared to not go anywhere near your boss's boss without consulting your boss first.

“If you go above your boss to their manager, then they will obviously be offended. This is just the way it is France and you can’t change that,” says Kara Ronin.

However as Ronin points out, the heirachial structure has its limits and it can also breed a sense of rebellion that is often present in French work places.

“People respect the hierarchy, so they expect a boss to do something and when they don’t, they lose respect for him or her,” she said.

READ ALSO: Ten point checklist – What to do to get that job in France The French love their lunches and eating at their desks is still considered weird.

So too is eating on your own. Now none of that sounds bad at all. In fact it sounds entirely sensible and positive. But there may be times when you need to eat at your desk or you just prefer a quick bite although you should be prepared to have to explain this habit to your colleagues. They may still think you're weird but they won't hate you.

The French in general place as much importance on lunch as they do dinner and this culture continues at work. It might take some getting used to, but lunchtime is generally when French workers socialise together. (French civil servants pop out on their lunch break 🙂 AFP)

You may be used to socialising with your colleagues after work, but in France this is far less common. While it depends on the industry you work in, for example the media or the arts are far more laid back, in general the French won't socialise as much as with colleagues after work.

The idea of the boss getting drunk with staff at a Christmas party is hard to imagine.

The French prefer to keep their social and work lives apart so if you hoped your job might help you make new friends you might be disappointed. But still there's no harm in trying and it's worth stressing that working culture is changing slightly and becoming a little more relaxed and less rigid.